A patient sits in my office. He is 73 years old and suffers from hypertension.

“I have to admit, Doc, I usually only take my blood pressure pills when I feel my pressure is high,” he says.

“You know you should take them everyday,” I reply. 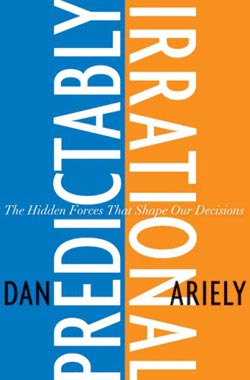 Later that day, I see another patient, a 50-year-old diabetic. “I just can’t give up the Pepsi,” she says, trying to explain why her blood sugars aren’t coming down.

As a physician, much of my work involves helping people make good decisions about their health. This should be a straightforward task. Isn’t their health in their self-interest? And yet it can be monumentally challenging. Healthcare providers receive no training into how people make decisions. I’ve often felt that with some more insight into this process, I might be able to better serve my patients.

I know I’m not alone. Many of us—teachers, parents, police officers, spouses—could benefit from learning more about how the human mind works, if only to help us steer others, and ourselves, toward better choices in life.
Two new books, Predictably Irrational by Dan Ariely and Nudge by Richard Thaler and Cass Sunstein, provide some help. Both books draw on decades of research into the often baffling world of human decision making in order to argue that we don’t act like little calculators, as economist Adam Smith imagined, with each of us intent on maximizing benefit in every situation. Instead, the authors say, we are often completely irrational.

“We are not only irrational, but predictably irrational,” writes Ariely. “Our irrationality happens the same way, again and again.”
Ariely, a behavioral economist, believes that if we can understand how we are predictably irrational, we can begin to improve our decision making. “We are pawns in a game whose forces we largely fail to comprehend,” he writes. Each chapter of his book describes how one of these forces—social norms, emotions, biological drives, and seemingly random numbers—influence our behavior. Even when we recognize these forces, he argues, we still underestimate their power over us.

For example, in one study, Ariely had young men answer questions about sexual behavior, once while in his lab and again while looking at pornography at home. In the lab, the guys piously insisted on the importance of safe sex. Not so when they were aroused—support for safe sex dropped precipitously. In the biological heat of the moment, argues Ariely, we simply can’t expect people to act responsibly, and thus we must learn to plan accordingly.

In another experiment, he asked students to write the last two digits of their social security numbers on a piece of paper and place a dollar sign in front of the number. Then, using that same paper, the students wrote down bids for items in a real auction being conducted in the class. The students with higher social security digits on average bid higher, suggesting that our behavior is subconsciously influenced by completely random numbers. “Our choices are often affected by random initial anchors,” writes Ariely. “In many cases we make decisions that may not reflect how we value different items.”

He continues: “These forces work on everyone, not only the thoughtless or weak-willed. The resulting mistakes are simply how we go about our lives. They are part of us.”

What Ariely stresses is that we know all people have weaknesses, but generally, we don’t see ourselves as being as flawed as the people around us—a useful insight when I try to understand my patients. Ariely’s research reminds us to be more vigilant, “to force ourselves to think differently to overcome our inherent shortcomings.” In some ways, this conclusion is disappointing: It might work to help us avoid paying too much for a product, but it doesn’t help us understand specifically how we can summon the willpower to stop eating those potato chips when they are right in front of us.

In other words, Ariely offers insight into the nature of the problem, but not much in the way of solutions. Fortunately, in Nudge, Richard Thaler (an economist) and Cass Sunstein (a legal scholar) take the research one step further. By knowing how people think, they argue, we can design environments that nudge people into making good choices, without infringing on their personal liberty or human rights.

Sunstein and Thaler see our brain operating in either one of two modes as we move through life. The Automatic System is fast, reflexive, and associative; it works great for driving, but not so well for taking the SAT. The Reflective System is slow, deductive, and requires work. As a result, we tend to rely on the Automatic System more. One of the main goals of the book, write the authors, “is to show the world might be made easier … if people could rely on their Automatic System more without getting into trouble.”

The elementary school cafeteria is a great example they provide of how environmental cues—or “choice architecture,” in the authors’ words—influence decisions. If french fries are the first thing offered in the cafeteria line, hungry kids will automatically pick them up. Holding out for the carrot sticks further down the line would require a level of reflective thinking that eludes many elementary school students.

Instead of banning the fries, Thaler and Sunstein say it’s better to display the food in such a way as to make it easier to choose the carrot sticks. People should be able to choose for themselves, but choice architects (in this case, the cafeteria workers) need to arrange things so that people operating in automatic brain mode make smarter choices—that is, the ones we would make if we were paying full attention, had complete understanding of the pertinent information, and had the self-control to decide rationally. Choice architects aren’t controlling people’s behavior; instead, they’re just giving people little nudges in the right direction.

Who can be a choice architect? Any of us can become one when we do anything to shape another’s decision. If you design new forms for employees to fill out or ballots for voters to use, you are a choice architect. The term also describes parents outlining educational options for their child. “There are many parallels between choice architecture and traditional [architecture],” write Sunstein and Thaler. In particular, “there is no such thing as neutral design … everything matters.”

Sunstein and Thaler go beyond cafeteria lines to propose choice architecture as an approach to organizing our entire society. They give their approach the grand name of “libertarian paternalism” and see it as a “true third way” between one philosophy that says “anything goes” and another that proposes to ban all the bad stuff. “The libertarian aspect of our strategy lies in the straightforward insistence that, in general, people should be free to do what they like,” they write. The paternalistic aspect is that “choice architects should try to influence people’s behavior to make their lives longer and healthier.”

Thaler and Sunstein suggest many practical applications of their approach. Their best proposal might be that people should have to opt out of retirement plans at work so that inertia won’t prevent them from starting to save. They also say people need to be nudged into saving energy because the various costs—from little things like higher bills to big things like global warming—are too far removed in time from the immediate benefit of using the energy.

Unfortunately for me (and my patients), the authors have less to offer with respect to health. For instance, they suggest offering an annual health maintenance deposit of $100, which a patient would get back after going through any tests his or her doctor recommends. This might work for motivated patients, but many of my chronically procrastinating patients aren’t there yet, even if it means losing $100.

However, for some patients, a social nudge—that is, the influence of other people’s behavior—might work best. For instance, if I could somehow get my diabetic patient’s friends and family to rave about Diet Pepsi, she might start preferring it herself. My hypertensive patient needs to move from reflective to automatic thinking when it comes to taking his medication if he is to avoid a stroke. A social nudge could help him, too—perhaps by taking his meds with his wife everyday. As a physician, I can suggest these nudges, but in most cases it’s up to my patients to be their own choice architects.

Perhaps I shouldn’t expect easy answers to tough problems posed by my most challenging patients. Some drives are too deep to overcome with self-awareness, and for many economically disadvantaged people, there are few structures that might nudge them in healthy directions. To create these structures, health care providers need to work with public health officials and community leaders. But by understanding the research in Predictably Irrational and by considering the most practical recommendations in Nudge, perhaps we can work together to forge a framework for healthier communities.