According to the 2019 World Happiness Report, negative feelings are rising around the world—and the United States is particularly hard-hit with an “epidemic of addictions.” Tellingly, the report also shows a widening happiness gap, with some people reporting much more well-being and others showing much less within each country. 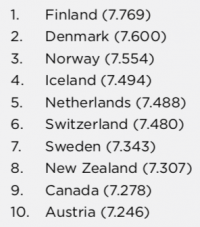 Released annually on the International Day of Happiness, the World Happiness Report ranks countries based on their life satisfaction in the Gallup World Poll. Residents rate how satisfied they are with their lives on a scale of 0-10, from the worst possible life to the best possible life.

This year, the most satisfied country was Finland, followed by Denmark, Norway, Iceland, and the Netherlands. The United States ranked #19 with an average score of 6.9, down from #18 last year.

This year’s report also analyzes how global happiness has changed over time, based on data stretching back to 2005. One trend is very clear: Negative feelings—worry, sadness, and anger—have been rising around the world, up by 27 percent from 2010 to 2018.

“We are in an era of rising tensions and negative emotions,” says economist Jeffrey D. Sachs. “These findings point to underlying challenges that need to be addressed.”

Who gets to be happy?

The authors also found troubling trends in happiness inequality, which is the psychological parallel to income inequality: how much individuals in a society differ in how satisfied they are with life. Since 2007, happiness inequality has been rising within countries, meaning that the gap between the unhappy and the happy has been getting wider. This trend is particularly strong in Latin America, Asia, and Sub-Saharan Africa.

The report also features commentary and analysis from economists, psychologists, and public policy experts about urgent issues in well-being, and one theme this year is the “sad state of happiness in the United States.” Research suggests that American adults have been getting less happy since 2000, while adolescents have been experiencing more depression, suicidal ideation, and self-harm since 2010. It’s difficult to say why this is happening, and to tease out symptoms from causes. Some researchers blame rising income inequality; others blame political polarization.

One thing is certain, says Sachs: “The U.S. is suffering an epidemic of addictions.” This includes an addiction to technology, which researcher Jean Twenge largely blames for the worrying mental health trends among U.S. adolescents. In her chapter of the report, she argues that screen time is displacing activities that are key to our happiness, like in-person social contact. Forty-five percent of adolescents are online “almost constantly,” and the average high school senior spends six hours a day texting, on social media, or on the Internet.

But we’re hooked on more than just technology. According to researcher Steve Sussman, around half of Americans suffer from at least one addiction. Some of the most prevalent are alcohol, food, and work—which each affect around 10 percent of adults—as well as drugs, gambling, exercise, shopping, and sex.

There’s another possible explanation for unhappiness, though: Governments are losing their way.

Last year’s World Happiness Report found that locals and immigrants within a country have similar happiness levels. In other words, immigrants who arrive adapt to the local psychological climate, whether happy or not. This suggests that something pervasive is influencing everyone’s well-being—and this year’s report focuses on the role of government.

According to survey results since 2005, people across the globe are more satisfied with life when their governments are more effective, enforce the rule of law, have better regulation, control corruption, and spend in certain ways—more on health care and less on military. It also helps to live in a country with more political stability, less violence, and less conflict. Overall, being confident in your government goes hand in hand with a satisfying life.

“We are in an era of rising tensions and negative emotions”

Fortunately, research cited in this year’s report also suggests that unhappy people can fight for change. Studies find that nations who are less satisfied as a whole tend to vote against incumbent politicians, and that election results can make a nation happier.

In particular, Americans could use their votes to support certain policies to help turn things around in the United States. For example, among the report’s recommendations are more public mental health services, regulations on prescription drugs and advertising, and mindfulness programs in schools.

The report does highlight some positive trends. Since 2005, the majority of countries studied have become more satisfied with life (despite rising happiness inequality in many regions). Countries like Bulgaria, Sierra Leone, and Ecuador have seen gains greater than you’d expect had their gross domestic product multiplied by ten. And if our governments aren’t taking care of us, we do take care of each other: Worldwide, nearly 30 percent of people donated to charity and 20 percent volunteered in the previous month; in the United States, those numbers were twice as high.

So, we might help promote happiness for all by voting and marching for change. We can volunteer and make donations. We can strengthen connections with family, friends, neighbors, and even people we only know online. As research suggests, it’s this ethos of connection and generosity that might help make next year’s World Happiness Report a happier one.