When Roger Clemens was indicted on Thursday for lying to Congress about whether he’d used performance-enhancing drugs, it’s unlikely that many Greater Good readers were surprised.

Here’s what Dacher originally had to say about Clemens’ performance on Capital Hill, based on the photo below: 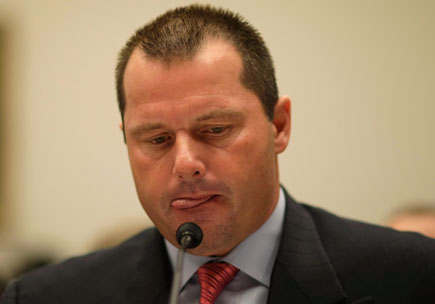 Research has identified seven strong clues that someone is lying: speech hesitations, stammering or repeating their words, sudden rises in the pitch of their voice, subtle facial expressions of negative emotion, touching their face, jiggling their legs, or nervously biting or licking their lips.

Roger Clemens is clearly showing two of them here. Of course we can’t hear his speech patterns or the pitch of his voice. But we can see a nervous lip movement, with him wetting his lips—a classic sign of anxiety. Second, if you look closely, you can detect a micro-expression of negative emotion, where the left corner of his lip is moving slightly down and to the side, and there’s a bit of pouching in his lower left cheek. These movements generally signal emotions of sadness, distress, or anxiety.

When people display these kinds of quick, subtle expressions, it’s as if they’re betraying their true feelings toward what they’re saying. Clemens wants to project that he’s telling the truth, but in these quarter-second displays of emotion, he’s suggesting that he’s really saddened, anxious, distressed, or even disgusted by what he’s telling Congress. That suggests he’s lying.

By contrast, here’s what Dacher made of Clemens’ former teammate Andy Pettitte when Pettitte apologized at a news conference for using human growth hormone: 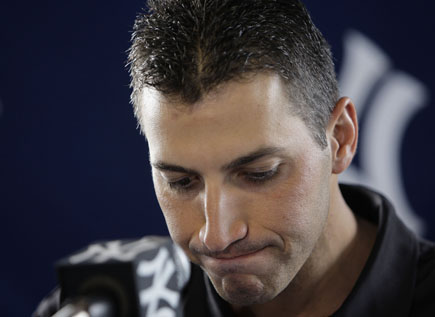 To most viewers, Pettitte’s expression will seem more genuine and trustworthy than Clemens’. How does he give that impression?

For starters, he’s offering a universal display of contrition. Pettitte is dropping his head down, and he’s averting his gaze from making eye contact with anyone. In the muscle movements around his mouth, we can also see displays of shame and embarrassment: The mentalis muscle is moving his chin up and tightening his lip corners, and as a result, a crest is forming around the corners of his lips.

There are evolutionary theories for why these kinds of gestures would be associated with apology, shame, and embarrassment. One theory is that downward head movements shrink the body’s posture, and that’s a sign of submissiveness across primate species. Avoiding eye contact with someone else is another sign of submission. And the tightening of muscles around his mouth could signal that he’s constraining emotion.

Taken together, these movements give him a more modest, deferential, non-threatening appearance—the kind of appearance you’d want to present when you’re asking for mercy or forgiveness.

Pettitte is dropping his head down, and he’s averting his gaze from making eye contact with anyone. A master of acting

I really needed to buy a car for my firm but I did not earn enough money and couldn’t purchase something.

Thanks for sharing these reference videos. Have to make time to watch all of it but these should be a useful bunch coming from you

Its really very best and useful site for all,I am using it from a long time,I really got many information from this site.I would like to thank you for the efforts you have made in writing this article. I am hoping the same best work from you in the future as well