Earlier this month, the Los Angeles Times sued the Los Angeles Unified School District (LAUSD) to obtain its teacher ratings, calculated using students’ standardized test scores. The Times, which already published LAUSD teacher ratings two years ago, argues that doing so is justified because it’s an important service to parents and the public.

Yes, of course, there must be school accountability. But we have good evidence to believe that (1) the Times’ crusade won’t actually help us identify effective teachers, (2) it may actually damage teacher (and student) performance, and (3) it may distract educators and the public from more important school reforms. 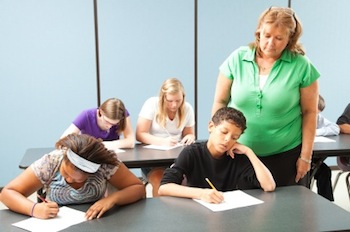 First, research has suggested time and again that “value-added” ratings of teachers don’t provide an accurate picture of that teacher’s abilities. The dramatic fluctuation of a teacher’s ratings from one year to the next suggests that there are numerous factors impacting these ratings besides teacher effectiveness. Some of these factors include the quality of students’ home life, summer recess (evidence suggests low-income students lose more of what they learned, perhaps because they don’t have it reinforced as much at home), variations in students’ abilities from one year to the next, and school attendance.

Second, there’s the psychological toll that value-added evaluation can take on teachers and that high-stakes testing can take on students.

Research has shown that high-stakes testing lowers the morale of teachers, increases their stress-levels, and makes them feel disempowered, guilty, anxious, and alienated—particularly those at high-poverty schools. Not exactly a recipe for teacher growth and improvement. And the public humiliation of having these ratings reported in the Times can only intensify these issues. Remember the old days when students were seated in a corner wearing a dunce hat? There’s a reason we don’t do that anymore, mainly because of the damage it does to a child’s self-worth. Teachers are no different. Researchers have found that public humiliation leads to high levels of depression, anxiety, anger, and helplessness. 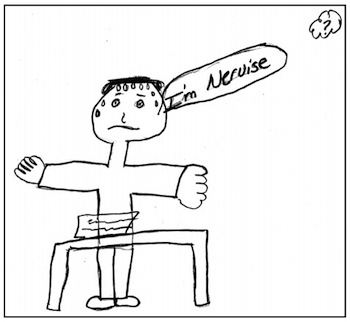 An elementary-level student's drawing depicting how the student felt while taking a standardized test.

Critics of value-added evaluation are very concerned that these kinds of ratings will discourage effective teachers from ever choosing to work at our neediest schools. Why would they subject themselves to the strong chance of failure, difficult working conditions, and the possibility of public humiliation?

Even more critical to the debate is the emotional impact high-stakes testing has on our students. One study asked elementary students to draw pictures of how they’d felt during a standardized test they’d taken the previous day. Not a single student’s drawing suggested that the experience had been a positive one. Instead, students drew pictures depicting nervousness, anger, isolation, and powerlessness (see image at left for an example).

Research has also shown that students who experience test-anxiety don’t perform as well on tests, which then lowers their self-worth. This turns into a vicious cycle for low-performing students whose anxiety increases with successively poor performances. Research has even suggested that lower-achieving students feel less valued and receive poorer treatment from both teachers and peers.

Perhaps worst of all, students who spend their days learning how to take tests more often than not lose their love of learning—the one thing that schools are supposed to instill in students above all else.

Finally, the extreme emphasis on testing begs a larger question: What is the purpose of education? Is it to produce students who can do well on tests or who are equipped to thrive in life and form meaningful relationships?

Science has shown that we’re not one-dimensional beings who fit into a tidy box. Instead, we’re very complex, made up of interrelated emotional and cognitive processes that science is just beginning to discover, let alone understand. And research clearly suggests that teaching both cognitive and social-emotional skills leads to academic success as well as a meaningful life—a life made up of strong social connections, purpose-driven activities, and positive emotions.

I’d love to see newspapers celebrate schools that do this well rather than demeaning teachers who need our support.

I agree with many things you said. I don’t believe that are enough justification to publicize any teacher’s ratings. And we should acknowledge there will be tremendous stress on the person who are rated. Also these metrics are prone to be misinterpreted by the public who would not likely to be able to take their variability into account.

That said I don’t think we should take the complete opposite view to say all teacher ratings are bad and they should not be used at all. I was just engaged in a debate in San Francisco school. The teacher’s union are reported to take a “complete ideological objection” to using test scores, even as a small measure in evaluating teachers.

No testings or ratings are prefect. It is true for value-added analysis. It is also true for the tests the students themselves take. Even the medical tests that cost hundreds or thousands of dollar are far from definitive. But this is not to say they should not be done at all. When interpreted correctly, each test will provide additional information to the overall picture of how well one is doing. The this picture is invariably going to be complex and multidimensional that should not be reduced to a single number.

The problem is not metrics is bad. It is how it is used. I don’t think it is useful information to release to the public. But it is valuable to the school administrator and teachers themselves to guide their development. We can’t improve if we don’t have a good measure of performance. The traditional way is base on intuition. I believe all the scientists who are running this site would agree that intuition has its limitation. Metrics are additional tools that helps to bring a clearer picture to show which area are doing well and which area need improvement. I hope some enlightened teacher and union member should start to embrace metrics instead of defensively dismiss them. Ideologically based position can hurt the public as well as themselves.

I think, as a recent high school graduate, that it is
important not to overemphasize the value of
standardized testing. It is not more important than a
child’s mental well-being or sense of self-worth.

Dear Wai,
Thank you for your thoughtful comment. You write
that “We can’t improve if we don’t have a good
measure of performance.” To me, that is the heart of
the problem. The tests measure only a small fraction
of student-learning and yet are given a tremendous
amount of weight in policy decisions. One of the
reasons we place so much emphasis on tests as a form
of assessment is that they’re an easy form of
measurement. True assessment of a student’s learning
is a much more involved process that requires a lot of
time and effort on the part of the teacher and school.
It also would require a shift in our beliefs about
teaching and learning, including viewing each student
as a unique human being with his or her own individual
strengths and weaknesses - neither of which can be
accurately measured by a paper and pencil test. Until
that time comes, I cannot advocate for the testing
system as it exists now.
Warmly,
vicki

Dear Also,
So wonderful to hear the voice of a recent student!
Thanks for sharing your thoughts.
Warmly,
vicki