Like a lot of TV viewers these days, we binge-watch our favorite shows on Netflix, consuming two, three, or more episodes—sometimes entire seasons—at a time.

But little do we realize, bingers like us are cheating ourselves out of happiness. 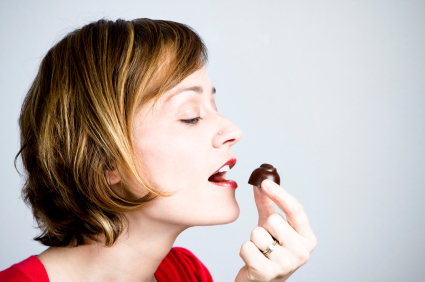 That’s the lesson from new research in the field of positive psychology. What this research shows is that indulging in life’s pleasures in smaller doses, or even giving them up for stretches of time, helps us enjoy them significantly more.

In one new study, published in the journal Social Psychological and Personality Science, researchers Jordi Quoidbach and Elizabeth Dunn had 55 people eat a piece of chocolate and report how they felt. Then the researchers instructed some of those people to abstain from chocolate for a week, told others to eat as much chocolate as they wanted, and gave a third group no special instructions.

When all 55 people ate another piece of chocolate at the end of the week, the people who had abstained from chocolate reported significantly greater happiness than either the bingers or the people left to their own devices.

In fact, the bingers reported feeling less happy after their end-of-week chocolate than they’d felt after eating their piece at the start of the week.

While this is the first study to find that temporarily giving up something pleasurable may be good for our happiness, it builds on years of similar results. One study found that people enjoyed an episode of the old sitcom “Taxi” more if it included commercials than if it did not. In another recent paper, people said they took greater enjoyment from positive experiences (sitting in a massage chair, listening to Japanese hip-hop) when those experiences were briefly interrupted.

As it turns out, people tend to get used to sources of joy and pleasure very quickly, soon taking them for granted. And when you have more of something pleasurable, it becomes easier to take it for granted, and harder to savor it. The result is a psychic numbing to the good things in life.

And it gets worse. While that numbing effect may sound obvious, we’re generally unaware of it in our own lives: Studies show that people (mistakenly) think that getting more of the things they value will make them happier.

At the same time, we tend to underestimate how consuming in moderation might boost our enjoyment—and happiness—in the long run: Participants in the “Taxi,” massage chair, and Japanese hip hop studies all thought the experience would be more enjoyable without interruptions. They were wrong.

Indeed, so much of our everyday behavior is driven by the misconception that more is better. We celebrate our most important holidays by cooking twice as much food as we need, then scarfing it down. We work hard to get a promotion—then after getting it, start thinking about how to get the next one. We stay up all night tearing through “House of Cards” or the latest season of “Mad Men.”

What’s more, this same misconception about happiness leads many people to covet wealth and material things. Research suggests that more money can bring us more happiness, but only until we earn up to about $75,000/year. After that, there seems to be a negligible increase in happiness from making more money, meaning that many of us waste a lot of time pursuing a happiness we’ll never reach. Or worse, our single-minded pursuit of wealth stresses us out, compromises our values, and strains our relationships—without bringing that elusive boost in happiness.

All of this research points to a paradox of happiness: It’s not tied to abundance but to recognizing and appreciating what we do have. Once we meet our basic needs, our lives become more satisfying if we can savor and be grateful for the good that’s already around us, before we strive for more.

This can be easier said than done. But coincidentally, millions of Americans have been getting a jumpstart on moderation over the past month with their observance of Lent.

For Christians, this is supposed to be a period of repentance and self-denial, of course, a time to give up meat, chocolate, sex, and other indulgences as a way to atone for sins. But Quoidbach and Dunn’s research suggests it may carry some other benefits: Temporarily denying themselves certain pleasures for 40 days may ultimately make people happier than consistently indulging in them. In other words, a religious ritual of renunciation might actually feel pretty good in the end.

At a time when science and religion are often seen as at odds with one another, it’s encouraging to see them both validate a basic, counter-intuitive message: Sometimes we get a lot from giving stuff up.

The ancient Lentan ritual of giving something “up” is
passé...Rather Christians aspire to a Lent filled with
gratitude, grace and generosity. And! We are happier
for it~