Music seems to be a social glue. Think of how love songs enhance our romantic feelings, how marching bands intensify our affinity for the home team, or how huge rock concerts make us feel one with a crowd of thousands. Music has some special power to increase our sense of connection and help us affiliate with others.

But why? What’s happening in our brains that makes an isolated set of sounds resonate in these ways? A new neuroscience study aimed to find out. 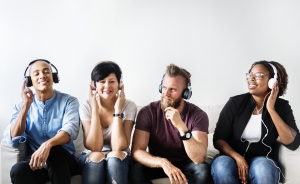 In the study, researchers scanned twenty college students’ brains using fMRI technology while they listened to very short clips of music—some familiar and some unfamiliar to them, and some they might like or dislike, according to what the researchers could gather about their musical tastes. The idea was to see how people’s brains responded to these different kinds of music and then to compare those neural patterns.

Afterward, people rated the music they heard and reported on how empathic they were in everyday life—meaning, how much they tended to feel sympathy for others in distress and were able to take someone else’s perspective . The researchers suspected that empathy—an important factor in developing social relationships, which creates a distinct pattern in the brain when people are experiencing it—might influence how we process music.

Analyzing the brain scans revealed some interesting patterns. Highly empathic people tended to have significantly higher activation in their brains overall and, specifically, in the reward centers of the brain when listening to familiar music they liked—meaning, they seemed to find music listening more pleasurable than people low in empathy. They also had higher activation in the parts of the brain implicated in processing social information—like when you try to understand another person’s perspective or what they might be feeling.

According to lead researcher Zachery Wallmark of Southern Methodist University, this finding is huge. It suggests that music is processed using the same neural architecture used for empathy and other social tasks, and that music likely “piggybacked” (in an evolutionary sense) upon the neural systems that evolved to help us navigate our social world.

“When we listen to music or engage in music, it’s essentially social engagement,” he says. “Higher-empathy people, who are more sensitive to social stimulus, hear music as if in the virtual presence of another person.”

Why is that? Wallmark doesn’t know for sure; he says that it’s possible highly empathic people want to appear more agreeable to researchers, so they evaluate music they don’t like more positively, even though they don’t truly enjoy it.

But it’s also possible they are more willing to give the music a chance. He and his colleagues noticed a distinct pattern when highly empathic people listened to music they didn’t like, familiar or not: They had increased activity in the dorsolateral prefrontal cortex of the brain, an area responsible for decreasing intense feelings, Wallmark says.

“Our interpretation is that when high-empathy people are listening to music that they don’t like, they’re putting the brakes on their negative emotions and trying to give the music the benefit of the doubt in a way that people who are lower in empathy don’t,” he says.

Does that mean that listening to music could help us be more empathic toward others, to give them the benefit of the doubt? Wallmark would like to test that idea in future studies. He points to prior research showing that music seems to boost our empathic reactions, and he’s optimistic that this is true.

Wallmark’s study adds to the growing evidence that music plays a special role in social bonding. Though people in Western culture often enjoy music passively on the radio or on our smartphones, says Wallmark, it probably has a deeper value for humans beyond aesthetic pleasure.

“[Music] may be this crucial ingredient that evolved over many years to help us navigate our social environment, increase social bonding, and coordinate with others,” he says.