The study, recently published online in Psychology of Music, suggests that interacting with others through music makes us more emotionally attuned to other people, even beyond the musical setting. 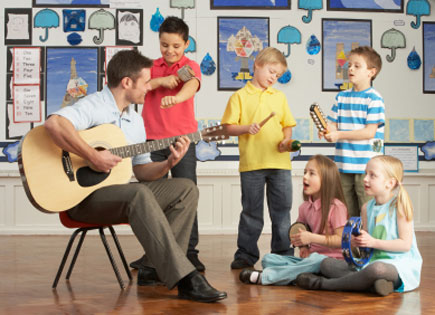 Researchers at the University of Cambridge observed 28 girls and 24 boys, all between the ages of 8 and 11, from four different schools in the United Kingdom with a similar socioeconomic makeup.

Roughly half of these children were randomly assigned to a special music program that the researchers designed, where children met once a week in small groups for an entire school year to play games that encourage interaction, imitation, and “mindreading” through music. For example, in the “Mirror Match” game, the children had to repeat or match a short piece of music played by another student. In the “Improvising Rhythm” game, the children had to coordinate their playing even as the rhythm was being constantly changed.

The other half of the students also participated in weekly games that encouraged interaction and imitation, but their games were without music, using techniques like storytelling and drama instead.

Before and after participating in either of the two groups, all children in the study took an array of tests to measure their “emotional empathy,” or their ability to experience another’s emotional state as their own.

In one of these tests, children viewed a brief movie clip showing a character in an emotional scene. Each child was then shown pictures of faces expressing six different emotions, and was asked to select the expression that most closely matched his or her own feelings after viewing the clip. Children demonstrated greater emotional empathy if they selected the expression that corresponded most closely with the character’s emotion.

The children also had to say whether they agreed with 22 statements designed to measure empathy, such as “I really like to watch people open presents, even when I don’t get a present myself.”

The results show that after the school year ended, empathy increased significantly among children in the music group but not in the group that played non-musical games.

That finding was somewhat surprising to the researchers, says Tal-Chen Rabinowitch, a doctoral student at Cambridge’s Center for Music and Science and the lead author of the study.

“In a way we expected the children who participated in the control games group interaction program to also show an enhanced capacity for empathy following the program,” she says.

The increased empathy among children in the music group suggests that interacting through music may hone our general ability to share the psychological states of others.

Still, Rabinowitch says she and her co-authors are hesitant to draw any definitive conclusions from this single study, since the number of students involved was small. In their Psychology of Music paper, they write that more research, involving larger groups of students, is needed to strengthen the link between music and empathy, and to explore how long the emotional effects of group music training can last.

This research is important, they argue, because prior studies have suggested that empathy is vital to kind and cooperative behavior, and to motivating people to stand up against bullying.

“Therefore,” says Rabinowitch, “if there is a way to educate for empathy using music as an enjoyable and welcoming medium, then it is important to be aware of this and understand how it can be done.”

I have heard of music increasing productivity, but this one is new to me.

This may be of interest to you and the readers here.
I interviewed Tal-Chen Rabinowitch about this study
and you can see the interview here.
http://bit.ly/KQZRY5