Trust permeates every part of our lives. We trust cars to stop when the light turns red; we trust grocers to provide produce that is safe to eat; we trust our spouses to pick up the kids when they say they will. Trust is the shortcut that helps us function in a complex modern society. 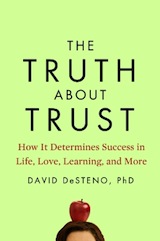 But trust the wrong person and you may be taken for a ride. So how can we both trust when it’s beneficial to do so, yet remain vigilant toward those who might betray us? And why trust at all if we could get burned?

In his new book, The Truth About Trust, David DeSteno helps answer those questions and more. DeSteno, a psychologist at Northeastern University, explains that while trust is the social glue that allows us to do more together than we could ever do alone, trustworthiness is a moving target, dependent on our moods, circumstances, and competing needs. We make daily choices—often subconscious—about whether or not to act in a trustworthy manner.

According to DeSteno, we tend to trust those who demonstrate both integrity and competence. But, because we often need to determine this on a moment’s notice, we’ve developed shortcuts for deciding when to trust. The vagus nerve—a nerve that runs through our central nervous system connecting our brains to several vital organs—responds below our conscious awareness to cues in our environment and will either calm our heart to produce more trusting behavior or excite our heart to increase distrust. Often these “gut responses” are fairly accurate, allowing us to make quick decisions regarding trust.

But these gut feelings are subject to manipulation, too. For example, DeSteno has found that inducing people to feel gratitude prior to having them play an economics game increased their level of trust and cooperation in the game, even toward people they’d never met. In addition, participants who had to complete a highly stressful public speaking task prior to playing the game increased their rate of cooperation by about 50 percent. Understanding influences like these, argues DeSteno, is important for managing trust in our lives.

There are also many misunderstandings about how trust works, and DeSteno tries to set the record straight. Contrary to popular belief, people cannot look at someone’s face and determine if they are lying or not, he writes. In addition, while many of us want to think of trustworthiness as a fixed state—with people and institutions being “trustworthy” or not—research has found that our trustworthiness is malleable, dependent on our mood state and the circumstances that surround us.

According to DeSteno, whether or not we act with integrity involves a kind of calculus inside of our heads, where “decisions to be trustworthy derive from conscious and non-conscious calculations weighing the trade-offs of short-term and long-term gains.”

It’s a bit like the fable of the ant and the grasshopper, he writes, where the hard-working ant who plans for a rainy day wins out over the lazy grasshopper. While we may choose the untrustworthy route if we think we can get away with it or little harm will be done, being trustworthy often produces benefits in the long run.

Perhaps this is why trust plays such an important role in so many social interactions. Research shows that children learn better when they have a teacher that is competent and whom they can trust to give them the right information and support them along the way. Even very young preschoolers have been shown to be able to assess the reliability of a teacher and will seek the one they think they can trust over the one they are more familiar with. Those kids are learning a skill they’ll need in the “real” world: trust is necessary in business transactions—and so is the ability to detect a cheater.

This gets at one of the main lessons of DeSteno’s book: We all want to know how best to determine when it’s good to trust and when we need to be more diligent—but, unfortunately, a person’s trustworthiness can’t be reliably predicted from past actions. A reputation built on trust is not a perfect predictor of future trustworthy behavior, writes DeSteno, though it can act as an imperfect guide.

A better predictor is our own subconscious evaluations. According to DeSteno’s research, people can pick out who is less trustworthy by certain “tells” for untrustworthiness—folding arms across one’s chest, leaning back, touching one’s face, or touching one’s hands. In addition, he has found that people who believe they hold more power in a situation—i.e. have more economic wealth—will feel less in need of others’ trust and will act less trustworthy. In one intriguing experiment, researchers observed a busy city intersection and found that cars typically belonging to the wealthy class—like BMW’s—were 50 percent less likely to wait for a pedestrian to cross the road before going through the intersection than cars typically belonging to the less wealthy.

Clues to trustworthiness like these are not useful online, however, which makes the online world particularly difficult for negotiating trust. Also, they are not so helpful for evaluating whether or not you can trust yourself to resist future temptations, such as foregoing dessert when you’ve pledged to diet or resisting an extramarital affair. DeSteno argues that the ability to trust oneself to act with integrity is impacted by many of the same forces that shape trust in others, and can be waylaid by our inability to predict how we will feel in the future and by our tendency to rationalize behavior from the past.

All in all, DeSteno’s book is a bit depressing. His main argument seems to be that trust is fraught with potential minefields, and that we can’t rely on ourselves to know when it’s best to trust and when it’s not.

However, armed with more knowledge, we can at least try to understand our biases and make better choices when faced with trust issues. And, as DeSteno writes, the default option should be to trust and to be trustworthy. Research has found that, like the ant in the fable, we are more likely to be rewarded than not in the long run if we do so.