As much as we try to teach our kids to do good, research suggests that they already have the seeds of goodness within them. Kids as young as 18 months old spontaneously help others and enjoy helping, for example, and they prefer people who are kind. 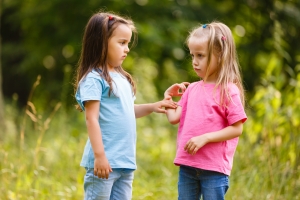 For the first time, a new study suggests that preschoolers value another relationship-enhancing strength in others: forgiveness.

Psychologists Janine Oostenbroek and Amrisha Vaish studied forgiveness with 20 four year olds and 20 five year olds. The children lived in the mid-Atlantic region of the United States, were mostly white, and nearly all had parents who were college graduates.

The researchers showed children different videos where one character shows the second character, Susie, a new toy that she is excited about. Susie picks up the toy to admire it, but accidentally breaks it. Susie responds remorsefully, apologizes, and says that she didn’t mean for that to happen. The toy owner responds with sadness and initially says she is upset with Susie.

Compared to four year olds, five year olds also showed advanced understanding and reasoning about forgiveness. For example, when researchers asked why they thought Susie liked the forgiving character more, five year olds’ explanations used words other than those in the videos.

Finally, both four and five year olds gave more flowers to the forgiving victim compared to the unforgiving victim. But, again, the five year olds gave more sophisticated justifications for how they distributed the flowers, including ones that referenced morality and goodness (for example, “Because she’s a nicer person” or “Because she did the right thing”).

In short, five year olds consistently—and four year olds less consistently—prefer and have positive impressions of victims who are forgiving compared to those who are not. Both four and five year olds are more generous toward forgiving victims. These findings suggest that children as young as five have a hearty appreciation of the social value of forgiveness, and that this value begins to emerge by age four.

The authors take this as evidence that showing forgiveness is one of the ways that humans have maintained cooperation over our evolutionary history.

“We propos[e] that forgiveness displays convey to the transgressor and to observers that the forgiver is a reliable cooperation partner who values her relationships,”  explain Oostenbroek and Vaish. “Forgiveness displays thus serve deep-rooted and vital social functions, and do so from early in development.”

Trucks will lose their wheels, and a doll’s clothes are bound to rip during playtime. Instead of acting in revenge and further harming their relationships, children can act on their instinct to be forgiving. As a parent, then, you can begin having conversations with your preschoolers about how forgiveness can help mend friendships that have been fractured by conflict (even if the toys remain broken).