Terry, a former colleague, once confided that working with emotionally volatile students was the hardest part of teaching for her. Not knowing if and when these kids were going to melt down or lash out made her feel as if she was walking on eggshells while teaching. And when these students did lose it, rather than help them regulate their emotions, Terry did everything she could to appease them. 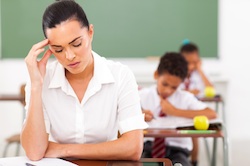 Knowing a little about Terry’s family history, I wasn’t surprised. She grew up with an emotionally unstable mother, which might have made Terry fearful of strong emotions. This in turn may have created an intense need for calm and controlled environments—one not often found in classrooms. Given this history, I wondered if Terry’s challenge was the result of an insecure attachment history.

Attachment theory is on teachers’ radars because of their front-row seat to the impact of secure or insecure attachment on students’ ability to learn. However, most teachers have probably never thought to turn the “attachment lens” back on themselves to see how their own attachment style may affect their teaching.

Yet research suggests that they might want to do so, particularly given that one study of 307 teachers found that every single one of them was insecurely attached—and this may have an impact on their relationships with students.

What is an attachment style?

Attachment theory is getting a lot of attention by researchers these days because of its profound effect on the quality of our relationships as adults.

In a nutshell, our attachment “style”—or internal working model of relationships—is the result of the emotional relationship we had with our caregivers and is usually formed by the age of three. We use this style throughout our lives to predict how others will treat us and how we will treat them.

If we had caregivers who cared for us in consistent, appropriate, and predictable ways, then most likely our attachment style will be “secure.” We view others and ourselves as safe, trustworthy, and deserving of care.

However, if the care we received was not emotionally healthy, then we might have an “anxious” or an “avoidant” attachment style. Those who are anxiously attached tend to be emotionally needy because of their desire for approval and fear of rejection. A person with an avoidant attachment style professes to be independent and without needs, often remaining emotionally distant from others.

Recent research indicates that a teacher’s attachment style may impact relationships with students and the ability to manage a classroom effectively.

One study of elementary and secondary teachers found that teachers with anxious or avoidant attachment styles were less likely to use positive forms of conflict management with students. For example, teachers who were high in avoidance—which involves a negative view of others—were less inclined to compromise in a conflict situation with students. The researchers suggested that this may be the result of an avoidant person’s discomfort with closeness, making him or her less likely to consider the students’ point of view.

Those teachers who had an anxious attachment style were also less likely to use win-win conflict management strategies. This finding reminded me of my colleague Terry’s situation. Because interpersonal conflict caused her stress and because she was concerned about damaging the relationship with the student, she tended to acquiesce to the student’s needs rather than considering what her own needs might have been in the situation.

Scientists have also found that securely attached people tend to be highly self-efficacious—the belief in one’s ability to complete tasks and reach goals. Not surprisingly, those teachers who reported using positive conflict management strategies—and tended to be securely attached—felt that they were more effective in managing a classroom overall.

What can be done?

When I talk about attachment styles in my workshops, inevitably someone will ask, “Is it possible to heal from an insecure attachment?” And I say, “Yes! Absolutely.” Our attachment histories do not condemn us to a lifetime of bad relationships.

One researcher who studied the attachment style of teachers also made an attempt to help those who were insecurely attached resolve some of their difficulties with students and colleagues. Working with teachers who often lashed out angrily at others, he helped them to see the connection between their early caregiving relationships and their anger issues. The teachers began to notice when they were being “triggered” into anger, which then helped them choose a more appropriate response.

Granted, most schools and/or teachers would probably be reluctant to participate in this kind of “therapeutic” intervention. A more viable option suggested by a different researcher might be supportive workshops for both pre- and in-service teachers to increase their awareness of how attachment styles are impacting their teaching. If institutional support isn’t available, teachers struggling with these issues might consider individual therapy—a route my colleague Terry took, much to the benefit of both her and her students.

Educators can also take heart from the study of 307 teachers, which found that age lessened the negative effects of insecure attachment. In other words, as teachers matured, they gained the insight that comes with experience—and this self-knowledge improved their relationships with students.

Teachers are human. Just like our students, our whole history follows us into the classroom. But when we do the hard inner work—such as healing from an insecure attachment—the investment in ourselves ultimately helps those around us as well.