After my friend Charlotte gave birth to her daughter Alice, she carried the girl constantly and smothered her with affection.

“You’re gonna spoil that baby,” said her next door neighbor, a grandfather who subscribed to an older-school style of parenting.

Charlotte can take heart: A study published this week suggests that babies with very affectionate and attentive mothers grow up to be more resilient, less anxious adults. 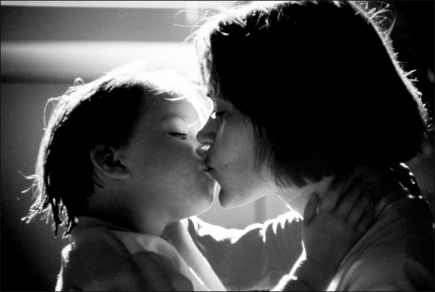 In the study, researchers examined data on nearly 500 people who, as part of a long-term research project, had been observed with their mothers by a psychologist when they were eight months old. The psychologist rated the mothers’ level of affection toward their babies, ranking it from “negative” to “extravagant.”

When those infants became adults, at an average age of 34 they took a survey to measure how much they suffered from various types of distress, including their levels of anxiety and hostility.

The results, published in the Journal of Epidemiology and Community Health, showed that people who’d enjoyed the most affection from their mothers as infants had the lowest levels of distress as adults. This was especially true for their levels of anxiety, but across all the psychological symptoms of distress, the results were the same: More warmth from a mother was associated with less distress later in life.

This remained the case even when the researchers controlled for factors such as the participants’ education level and parents’ socioeconomic status.

The researchers write that their results suggest “even very early life experiences can influence adult health” and emphasize “the importance of having a strong nurturing relationship” in childhood.

Trying to explain the link between this “nurturing relationship” and adult resilience, the researchers speculate that a lot of affection may help children develop a secure attachment to their mothers. This feeling of security may, in turn, give them a stronger sense of self that serves as a buffer against stress. They add that a warmer relationship with their mothers may also make children feel more positive emotions; other research suggests that, like secure attachments, a steady diet of positive emotions can help people cope with whatever life throws their way.

The study is especially significant because it tracked the participants from the time they were infants through to adulthood; most studies on this topic have hinged on the participants’ recollections of their childhood.

However, as the researchers note, one limitation is that it relies on psychologists’ subjective judgments of what constitutes “normal” or “extravagant” levels of affection. Plus, what may have been considered “extravagant” in the 1960s (when the mothers were observed) might seem less so today.

The researchers argue that, should their findings be replicated, they would suggest that to help children develop into secure and resilient adults, parents, policymakers, and others should focus their attention on the relationships kids form with caregivers from a very early age, even earlier than is typically considered. They add that these results might also make a strong case for public policies that improve access to high-quality childcare.

I am a father myself and I am all for a lot of affection. But just as in any case of relationship between two living creatures one has to know if showing of affection is beneficial or wrong. In this case I agree with verdecove. One more thing before I go in the photo above the mother is kissing the child on the mouth, which I think inappropriate in any case.

The study should have also factored in affection levels from fathers.

Good point, Reena—another limitation of the study. As I note, amount of affection toward infants was measured from just a single mother-baby observation. (Plus, that data was originally collected in the early 1960s, and back then they might not have considered fathers’ affection to be a big factor in anything.)

Having more data on parenting styles, including on dads as well as moms, could paint a more detailed picture. That said, it’s interesting that they found that mothers’ affection alone, even based on a single observation, could correlate so strongly with better mental health later in life.

As a new father I can agree with the power of kisses and affection I see how my son is growing and how he needs the love of his mother.  I have also noted my sister who is not very loving and although her child is older he appears very needy for affection that he does not receive.

As an elementary school teacher who has spent 20 years in classrooms watching an ever increasing level of hostility and aggressiveness in children, I have long felt that it is about the child’s failure to be able to trust and deeply bond that comes, in part, from a society where fewer and fewer mothers are able to spend time with their infants.  I am not touting “barefoot and pregnant” or that all mothers should stay home.  Far from it.  However, add to that the fact that daycare centers attempt to have all part-time workers so they do not need to pay for benefits and you have a recipe for a society in grave danger.  I’ve heard it said that when the children of today reach the time where they have to decide whether or not to send their parents away, they won’t blink an eye.  It will be all about “Does it improve the quality of my life?”.  Just a thought, albeit scarey!

Thank you for this wonderful article. I’m a very affectionate and demonstrative mom and have always wondered if there was such a thing as too much affection. It feels good to know that I was right to follow my instincts and “smother”  my daughter with kisses from the day she was born 😊

@enthusiasticeducator: Thanks for the thoughtful post. A lot of research—and observations like yours—certainly does make a strong case for better parental leave policies. But I think it’s worth noting that recent research suggests that parents today (mothers and fathers alike) actually spend more time with their children than parents did 30-40 years ago, though that’s not necessarily in a child’s infant years. As you note, there are probably a whole host of factors contributing to the problems you’ve observed, involving family policy, the economics of child care, and much else.

I have a 3 year-old boy and we give dozens of juicy kisses - right on the mouth! - every day.  I was really struck by the first comment, that it is inappropriate.  I have such an amazingly happy, well-adjusted, emotionally healthy kid!!

In addition to kisses, I touch his face every time i have a chance.  My therapist once told me, of my husband who’s mother left him when he was a young child, to touch his face, as it is her experience that a man who did not receive tenderness when he was young still needs it so.  My son now reciprocates and, in addition to our mushy kisses, it has become an important form of intimacy for us.  In times of distress, sadness or disconnect, he’ll reach out and cup my face with his hand.

Interestingly enough, it never occurred to me that this article did not automatically include fathers.  I think, because I have known several instances where fathers were the sole parent, I really thought it just meant great love and affection from your parent(s).  Those instances actually came to mind for me as I thought back over examples of wonderful, affectionate parenting.  Makes me see how easily we filter information through our own data bank.  Now having this pointed out, I agree that another study would be interesting, but I suspect being deeply loved and having a profound sense of security, balance, and compassion are nourished by any parent or guardian who provides an abundance of affection.

Great post. There are so many theories and studies about how to grow up children. Many men - many minds. Thanks for sharing.

cute article. but it maybe a bit outdated if the study dates back to raising kids from 60’s. times and parenting have changed. still a cool article

great article. raising kids is so ever evolving. i never grew up this way, but i think id try to raise my kids this way. its good to be affectionate.

Kiss means deffirent in all clutures ..
so .. the power of kiss is not the same in each country ..
even the way of kissing is not the same
any way .. you should write the next one about kiss in different cultures ..
and thanx for this post