In 1999, psychologists Martin Seligman and Chris Peterson set out to create a new paradigm for psychological research and practice. Instead of focusing only on how to ameliorate mental illness, these two pioneers sought to move the field of psychology toward studying the positive side of human behavior, as a way of helping to promote human wellbeing and thriving. Their initial work to uncover and classify universal strengths and virtues is often considered the beginning of the positive psychology movement. 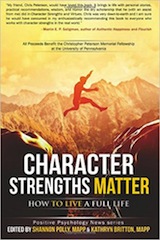 Now, a new book called Character Strengths Matter: How to Live a Full Life, edited by Shannon Polly and Kathryn Britton—and dedicated to Peterson, who passed away in 2012—provides an overview of the classification of character strengths and suggests ways that one can cultivate these strengths in everyday life. Proceeds from the sale of the book will help to fund a memorial scholarship in Peterson’s name.

According to the model, there are 24 distinct “character strengths”—virtues that are recognized worldwide as important to a life well-lived—including bravery, fairness, humility, leadership, and open-mindedness, to name just some. Each person has a constellation of strengths, including signature strengths (which are most prominent and can be used in many settings) and weaker traits (which can be developed further, if desired).

Readers are invited to take a character strengths survey—developed by Peterson and Seligman and available for free online—to better understand their own personal profile, and then to use the book to explore their strengths and weaknesses in more detail. Ultimately, the goal is to help people tap into their strengths in everyday encounters in order to work more effectively, enjoy life more, and contribute to the greater good. And, according to Ryan Niemiec, one of the authors contributing to the book, research has shown that those who consciously apply their signature character strengths in new ways each day experience increased happiness and decreased depression.

The book is divided into two parts. In part one, each strength is given its own chapter, including a short description of the strength, an article or interview that flushes out more information about the strength (culled from articles previously published by Positive Psychology News), a list of five suggestions for how one can cultivate the strength in everyday life, and an inspirational speech or text that helps one embody the strength. In part two, a handful of individuals explain how they’ve used the concept of character strengths in their work—for example, as management consultants, educators, and therapists. The authors suggest that readers can either read the book cover to cover or skip around the book, as interest drives them.

The book has its positive side (no pun intended)—it simplifies the concept of character traits in a way that some will find refreshing and accessible. It’s also nice to hear the voices of many scholars who’ve studied these traits and to get some good ideas on how to build one’s character strengths through easy to do interventions.

On the other hand, I found the book to be maybe a little too simplistic, giving short shrift to the science. If you’re looking for evidence and proof, this isn’t the book for you. But if you are a curious type—or if you’re already sold on the science—I suggest you go ahead and at least take the character strengths survey to see what it says about you. You can also get a taste of what approaching the world through character strengths is all about—and perhaps be inspired to explore your own personal strengths further. And that will be all to the good!