In Evolution for Everyone, David Sloan Wilson explains the basics of evolutionary theory and describes how evolution shapes the daily behavior of all species, especially human beings. Like E.O. Wilson, the father of sociobiology, David Sloan Wilson’s early work on cooperative insects has shaped his view of life and evolution. He believes that group selection—the idea that natural selection works on groups of organisms, not only the individual—has governed our development as a species. 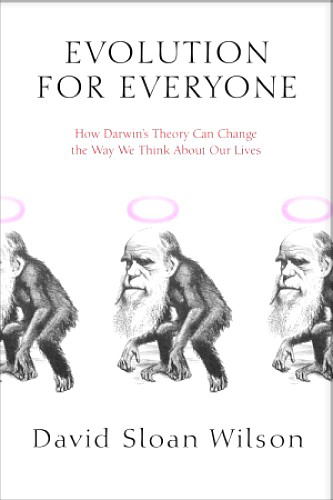 According to Evolution for Everyone, we have achieved our astonishing population growth because cooperation within small groups provided a great selective advantage over other, more hierarchical primate species. It is cooperation that allowed for cultural evolution—that is, the gradual adaptation of behavior and technology to new environments. Cultural evolution has allowed humans to adapt to environments from the Arctic to the Amazon in a timeframe that would have been impossible with mere physical adaptations alone.

Though much of human history is about our inability to cooperate, Wilson reveals how cultivating pro-social behaviors can help make society as a whole more cooperative. He provides the example of the Vikings, who were once among the most violent cultures on the planet. Today, their descendents are among the most peaceful. Wilson offers us evolutionary-guided insights that might make more such changes possible.