There’s a saying in journalism: “If it bleeds, it leads.” This means that if a story covers some kind of disaster or violent death, it garners attention and increases your audience or readership.

But in Broadcasting Happiness, former broadcast journalist turned happiness researcher Michelle Gielan makes the case that this viewpoint is false and potentially harmful. Yes, we are primed as humans to be alert to danger—hence, the attention to bad events. But we are also primed to respond positively to uplifting stories, and can reap many benefits from them, including increased happiness, better health, and more success in business, to name a few. 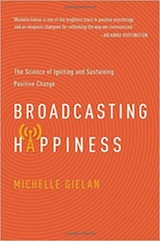 According to Gielan, research shows that positive stories do grab our attention and are often the stories most shared on social media. She points to the Huffington Post’s decision to focus more content on good events happening around the world, claiming that this kind of coverage is more realistic since it takes into account the many people who act heroically in disasters and the many people who successfully engage in making the world safer and happier—stories that are often lost in typical news coverage.

But more importantly, writes Gielan, this shift toward looking at what’s working in the world is important for another reason: it helps people realize that they aren’t helpless and that they can make a difference in the world. When we hear uplifting stories, we are more likely to feel good, become inspired, and take positive action—something researchers call the elevation effect. This same dynamic is true in everyday encounters, as well as in journalism, she argues, because we are all broadcasters of a sort. We need to pay attention to how our communications shape the views and motivations of other people, especially if we want to help foster more creatively, connection, and caring in others.

“By changing the way we all communicate, we can make the people around us at work, at home, and in our communities believe that their behavior matters and therefore see a path forward,” she writes.

That’s because our social brains are finely tuned to our social environment, and our emotions and attitudes are contagious. When we communicate optimism and a can-do attitude, those around us feel hopeful and more empowered, and they are more likely to get engaged in helping solving problems. The opposite is true when we communicate negative messages—people tend to feel hopeless.

Gielan outlines several ways in which we can start communicating more positively in our everyday encounters. She suggests that we prime the brains of those around us by leading any conversation, report, speech, or email with something positive, like a compliment, good news, or inspirational story. This primes the brain to be more responsive and trusting, she writes, and has been shown to increase problem solving and improve the mood of others.

In one Stanford University study she recounts in the book, participants first met in small groups and then individuals were taken to isolated rooms to work on challenging problems. Some participants were told they were working “together” as a team, while others were not, even though there was no actual group interaction during problem solving. The researchers found that those who thought they were working together with teammates ended up working 48 percent longer, solved more problem sets, and were less tired after the challenge than those who thought they were working alone. In other words, the thought of “being in it together” was enough to induce a different mindset about what they could do. Obviously, this could have positive implications for work settings.

“If you want to build greater team cohesiveness and subsequent success, adding even just one tiny positive word to what you say can make all the difference,” writes Gielan. That’s because our brains work better when we are in a positive frame of mind.

Though we often come to our interactions already having positive or negative associations with experiences or people—just think, for example, what the word “boss” brings up for you—it’s always possible to rewrite that automatic association, writes Gielan—it just takes effort and repetition. If we learn how to focus on past successes more than past failures, we will encourage more positive associations, making it easier for people to put forth their best efforts, whether in families, businesses, or social institutions.

Optimism is key, and there are many scientific studies supporting the positive effects of optimism on our health and wellbeing. Yet, some of Gielan’s ideas for promoting optimism seemed questionable to me. For example, she writes that when we sort through facts in our world, we should sift through them looking for examples of positive facts that might motivate us, rather than focusing on negative ones that might discourage us. This might be well and good when we’re talking about how to interpret our personal experiences; but this doesn’t seem like a good recipe for evaluating science, as Gielan seems to suggest.

As an example of this, she writes about how she personally took heart from a researcher who questioned the link between a women’s age and declining fertility, which made her less afraid about delaying childbirth. However, there is a whole line of research that shows fertility declines with age (for both men and women), and that risks for having a baby with Downs Syndrome and other complications increases with age. I have to question Gielan’s tactics here, no matter the potential “feel good” results. It seems that cherry-picking one’s facts might also prove disastrous, leading people to pursue false hopes or act on false assumptions—the costs of which Gielan does not consider.

Better is Gielan’s advice around handling personal challenges and the stress they cause. We often augment our stress when we start imagining worst-case scenarios, like “my child will never get into a good college” because she got a “C” on her exam, or “I’ll never finish this work assignment” because we got a slow start. When we look for positive aspects of the situation, in addition to the negative ones, we have a clearer picture and can find hope as well as potential action steps to improve the situation. This will naturally decrease stress that can otherwise feel overwhelming.

Her advice around handling toxic people in our life is also helpful, as we all respond better to others when we act from a place of calm and goodwill. Research has shown that it’s good to strengthen our gratitude muscles—by writing down positive things that happened to us during the day or taking pictures of positive moments in our day, for example—because it improves our mood, which is protective when we are dealing with difficult relationships.

Many of the stories Gielan shares are interesting for managers who are facing tough situations at work—such having to communicate bad news to staff. Research shows that when you have bad news and there is nothing that can be done about it—for example, you have to tell someone they are fired—it’s best to tell the bad news first, then try to use positive messaging for helping your audience accept the news and move on. If the bad news is avoidable with a change of attitude or behavior—such as being able to meet a target sales goal—it’s better to give good news first, then the bad news. This activates people’s interest and engagement in subsequent positive, goal-oriented behavior.

The most important thing in relating any bad news is to use what Gielan calls the four C’s:

She gives an entertaining account of a traffic cop who put this model to use, resulting in zero complaints from citizens receiving tickets. “Delivering bad news is a part of life, and it’s never easy,” writes Gielan, but “delivering bad news using the four Cs not only allows you to talk about the negative without sounding or becoming negative yourself, it also leverages these conversations to create scientifically better business and personal outcomes.”

Gielan has an important point to make: many times we can avoid problems if we express more positivity and kindness, and that this message needs to go viral.  She suggests a number of ways to make this happen, including creating “gratitude boards”—places where people can post what they are grateful for—at work, sharing interesting, positive stories with others while providing avenues on how to apply lessons from the stories to life, and inspiring quiet allies to use their influence to broadcast positive messages.

In this way, she argues, it’s possible to spread happiness, making the world a more positive place to be. And that is a good news story worth spreading!