A girl wears a new hairdo to school and becomes a victim of relentless verbal taunts so unbearable that she leaves the school. A gay teen comes out on Facebook and becomes the target of homophobic abuse. A girl who pursues sexual relationships with multiple boys at her new school is labeled a “whore” and becomes so emotionally distraught she kills herself.

These are the stories of bullying that Emily Bazelon explores in her new book, Sticks and Stones: Defeating the Culture of Bullying and Rediscovering the Power of Character and Empathy. Bazelon, a senior editor at Slate.com, has done her research, talking to all of the players involved—experts, families, schools, and both bullies and victims—to get at the complicated dynamics of these events. And because of her willingness to suspend judgment and to listen to all sides, she has some interesting insights to share. 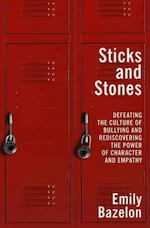 For one, many of the kids labeled as bullies in these stories don’t see themselves in that light. Instead, they consider their verbal taunts as part of normal teen “drama,” which plays out continuously in middle school and high school. While Bazelon found that many students seem to recognize the wrong in teasing kids who are weak or helpless, they don’t always see verbal taunting as bullying—especially if the victim has equal or near equal social status, or has given as good as they got.

Kids find many social rewards for bullying, which perpetuates the problem. As Bazelon writes, “Maybe they’re after a laugh from another kid they want to impress, or induction into a clique; maybe they want to publicly distance themselves from a friend they sense is now seen as a loser.” These kinds of rewards make bullying an insidious problem hard to resolve easily.

However, not all kids react the same to bullying. Many find it abhorrent and will stand up to bullies at school. Also, while some victims fall apart when taunted, others learn to handle it, by employing friends, disengaging from the conflict, or otherwise growing from the experience. In other words, taunting between students—at least from a teen’s perspective—may not always have only negative consequences.

Bazelon believes that the media fuels fears around bullying that are exaggerated, and that parents often react in out-of-control ways, making the problem worse. The vast majority of kids in schools don’t bully, she says—at least not if you define bullying as abuse repeated over time and involving an imbalance of power, the definition attributed to Dan Olweus, the researcher who first popularized the anti-bullying movement.

And therein lies the problem: Too many incidents are labeled as bullying and then relentlessly prosecuted in the media, sometimes leading to more trauma for families and fragmenting communities, when a gentler, less knee-jerk reaction is what’s needed to help improve the situation.

“For better or worse, adults play a crucial role in bullying stories,” writes Bazelon. “When the narrative spins out of control, it’s usually not because of the errors and wrongdoing of kids.”

For example, the girl who was labeled a whore at school had been suffering from depression for quite awhile before killing herself. Her death was a tragedy—but were the kids who taunted her really to blame? Instead, the girl should have been receiving treatment, to help her through her depression and build her coping skills. But too often there are not enough resources at the school to follow all of the kids who are suffering from mental illness, and it’s easier to put the blame on the bullies.

This is also where Bazelon’s case for character education and empathy come in. If we put our energies toward getting everyone in a school to agree to treat each other with respect and consideration—teachers and administrators, as well as students—we will improve the social climate for the vast majority of students. Individual counseling and more serious reprimands can be reserved for victims and bullies who need that kind of attention.

Bazelon evaluates some of the programs that have a proven track record for changing school social climates, including a “positive behavioral intervention and supports” program developed at the University of Oregon and Olweis’ anti-bullying curriculum. Using examples from schools that have implemented these and other programs, she illustrates how much of their success depends on their implementation.

“As I traveled from school to school and talked to expert after expert, I concluded that the most important thing is for a school to pick one approach that administrators, teachers, and parents buy into and stick with it,” she writes.

But the problem isn’t just with schools, writes Bazelon. When TV reality shows, political commentators, and other media regularly glorify putdowns and posturing, they send a message that it’s OK to bully. She also admonishes parents to play their role, by learning how to stay connected to their children and monitor their online lives, while being careful to not over-react to social “drama” and allowing their kids to make mistakes and grow from them.

Bazelon has a beef with social media sites like Facebook, who seem “eager to sign up our kids and encourage them to share, share, share,” but who could and should “invite in some administrators and counselors who are currently sweating over cyberinvestigations, and ask them how to make their jobs easier,” perhaps by offering a hotline or email drop box where schools could alert Facebook to posts that involve bullying.

The main message of the book is that we all need to do our part to protect kids and to not get lost in anti-bullying frenzy. Vigilante-like attacks don’t do any good. A better approach is to teach positive social-interaction skills to everyone, so that kids can help police each other and can trust that adults are on their side, willing to help.

I hope that Bazelon’s book will raise some awareness on the matter and further push schools towards adopting effective social-emotional learning programs. Then, perhaps, we’ll all have fewer of these heart-wrenching stories in our lives.