Can we overcome bias? 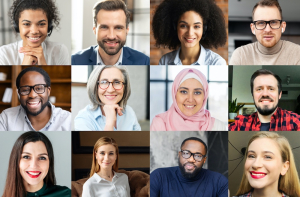 We all tend to make unconscious judgments about people based on their social identities and the cultural stereotypes that cling to them. But bias can be disastrous for its targets, affecting their health, success, and happiness.

In her new book, The End of Bias, science journalist Jessica Nordell explains the many ways that bias—particularly, unconscious bias—plays a role in our lives. By sharing research findings at a granular level, as well as stories of individuals affected by bias, she shows readers why we discriminate, how harmful bias is, and what we can do to help eliminate it.

The roots of bias

Bias exists, in part, because our brains naturally seek shortcuts for understanding our complicated world. We categorize things we encounter in life (including people) and then absorb “cultural knowledge” (including societal beliefs and attitudes toward different groups of people), which leads to stereotyping and biased expectations in our everyday interactions. This happens unconsciously, so that even if we’re not consciously prejudiced, we are still prone to automatic stereotyping—especially when we’re low-energy or stressed.

It takes effort to avoid our knee-jerk responses, says Nordell, which often keeps things from changing. For example, she describes a school in Sweden where teachers set out to eliminate gender bias in class by first filming students in action to see how gender stereotypes developed. Surprisingly, they discovered teachers’ behavior was the problem: They’d been unconsciously treating girls and boys differently, praising girls for their clothing choices, comforting girls more tenderly when they cried, letting boys be rambunctious without chastising them (but not girls), and more.

The teachers had to learn to catch themselves and find new ways of interacting with students—including never referring to students as “girls and boys” but only as “friends” (or using their names). That revision was needed because even just saying “boys and girls” has been shown to increase gender-based stereotyping.

More often, we don’t make that level of effort, and bias continues to fester in subtle ways. One reason is that it actually feels good when our stereotypes are confirmed—such as when our female boss seems more empathic or our Asian students excel at math and computer programming. That’s because our brains like predictability. It makes the world seem congruent with our understanding of the way things are and can bolster our self-esteem. This also means that we don’t like our stereotypes questioned, and, often, we don’t like those who buck the trend (think Hillary Clinton, for example).

To illustrate, Nordell relates an eye-opening story about the 2015 film Straight Outta Compton. After it was made, Universal Studios created race-targeted film trailers on Facebook—one for whites (featuring Black characters pointing guns, acting violently, and drinking), one for Blacks (featuring the rise of Dr. Dre and Ice Cube—members of the rap group N.W.A.—as nonviolent protesters against police brutality). This turned out to be an effective marketing strategy, probably because it confirmed both groups’ expectations about social issues in Compton, says Nordell.

The fact that maintaining bias feels good and is expedient doesn’t make it right, of course. But it does explain why it takes effort to overcome. For the privileged, writes Nordell, it can be especially hard to see bias, because privilege “can create a sort of blindness to others’ suffering: When the world unfurls its red carpets for you, it is challenging to see the shards of glass others must traverse.”

The consequences of prejudice

Unexamined bias has dire consequences for all of society. By taking us through a detailed accounting of the research, Nordell reveals the staggering costs of prejudice.

These overt cases of discrimination are obviously unjust. But Nordell argues that even less obvious cases of bias can have downstream consequences.

She cites an interesting study she coauthored in which researchers ran a computer simulation to see how small gender biases in the workplace can affect a woman’s ability to rise to the top of an organization. Even a company starting out with equal numbers of women and men in leadership positions will soon have fewer women leaders, if common gender biases—like penalizing women slightly more for mistakes or not giving them full credit for their work—are allowed to fester unimpeded.

Though Nordell argues systemic policies and practices must be changed to fight bias, she also believes that won’t happen until individuals step up to recognize their privileged positions and figure out ways to dismantle the system. To that end, she offers hope for change, providing examples of practices that have successfully reduced bias individually and institutionally.

Don’t aim for “colorblindness”—meaning, don’t try to ignore difference. Instead, it’s important to recognize difference and work to decrease your stereotypical responses while staying open to learning and noticing differences between individuals in the same group. 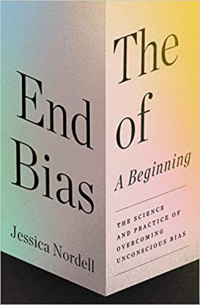 The End of Bias: A Beginning: The Science and Practice of Overcoming Unconscious Bias (Metropolitan Books, 2021, 368 pages)

Learn your history. Too many of us have not been adequately taught about our history and the ways that bias and discrimination have shaped it—such as the lingering effects of Jim Crow laws on unequal job and educational opportunities for Black and white Americans. A better understanding of systemic causes of racism, for example, can motivate people to revise their biased views. It can also help those targeted by bias to be more resilient.

Work on reducing your stress levels when you’re interacting with people who are different from you, because negative encounters can promote more bias and less self-reflection. Practicing mindfulness may help, as it can reduce your stress while also encouraging better attention to actual (rather than imagined, stereotypical) behavior in others.

Increase your sense of common humanity by purposefully engaging with people of different backgrounds, especially in fun, cooperative, and meaningful ways. Or, if it’s not possible to engage directly with people from other social groups, try a loving-kindness meditation (a practice that involves wishing others well, including strangers), which has been shown to reduce bias by increasing our sense of oneness with others.

Recognize how undoing bias has meaning for you. If you identify as a person who cares about fairness and equality, you will feel more authentic and self-congruent when you actively work to recognize bias in yourself and eliminate it. Fighting to create a fairer, more just society may make you part of an important social movement, too, which can create a sense of meaning.

Uncover places within your organization where workers are evaluated from a personal rather than objective perspective—for example, within your hiring practices, work evaluations, promotion opportunities, and more. Then, take precautions to ensure that bias doesn’t creep into those systems.

For example, you can take a lesson from the New York Philharmonic and Boston Symphony, which started doing blind auditions to eliminate bias against women and people of color. Or you might follow an urban school district’s plan to test all students for “giftedness” (rather than just those recommended by teachers and parents), which resulted in greater representation from low-income, minority students in gifted programs.

Stay open to listening to people within your organization who may challenge the usual way of doing things, recognizing that you may have blind spots when it comes to bias. Too often, people targeted by bias try to point it out to those in charge only to get sidelined or discounted.

Consider enacting a form of affirmative action, prioritizing the addition of and support for those who are underrepresented within the organization at all levels. Seeing representation within an organization encourages others in the same social group to be more comfortable and productive. You can take a lesson from MIT, which actively recruited more women and minorities into faculty positions, leading to greater diversity in not only its staff, but also its student body.

Partner with people who have expertise in bias reduction to come up with new ways of doing things, rather than relying solely on past expertise or Band-Aid solutions. Research has shown that there are effective ways to reduce bias, but it takes effort and resources. For example, some police departments have tried mindfulness training for their officers or worked with bias experts, like Jennifer Eberhardt of Stanford University, to help them respond differently in stressful, uncertain encounters with suspects (which would otherwise likely lead to biased responses).

What’s needed, writes Nordell, is the willingness to look honestly at ourselves and our institutions, recognize privilege when we have it, and consciously root out bias wherever we see it. In that way, we can give everyone the opportunity for a better life—including those of us who are more privileged.