Smartphones are re-shaping family relationships. Right now, as I write in a coffee shop, I can see a mom and dad captivated by their phones while their baby babbles to try to get their attention. I’ve seen parents use their phones as babysitters—and I feel empathy for them. Everyone needs a break, sometimes to connect with other adults or just to get some work done.

But what happens to children when their parents’ attention is diverted away from them and is focused on their phones? Recent research validates what you might already be thinking! 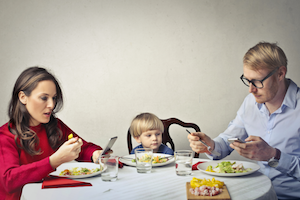 In one study, researchers found that toddlers’ ability to learn new words was derailed when their moms were briefly interrupted by a cell phone call. In another recent study, 170 couples with young children completed questionnaires about how much they perceived their mobile phone use was a problem and how often their devices interrupted daily conversations or activities with their children. Parents also reported on their children’s problem behaviors, from sulking to temper tantrums. As expected, the researchers found that the more parents reported phone-related interruptions, the more they reported their children displaying both types of negative behaviors.

In a different study, Brandi Stupica examined the effects of parents’ mobile phone use on their children’s athletic performance. She asked children to run around the bases of a softball diamond under two different circumstances. In one session, researchers told parents to pay attention and respond to their children as they would normally, and turn their bodies toward them. In the other session, they told parents to immerse themselves completely in their phones and ignore their children’s bids for their attention while keeping their bodies turned toward them.

The researchers timed how long it took kids to run around the bases and they recorded how often kids tripped, fell, stumbled, or made a false start for each of the sessions. The finding? Children ran faster and were more physically coordinated when their parents were available and responsive compared to when they were absorbed in using their mobile phones.

Smartphones are now a part of our lives, and most of us won’t be giving them up anytime soon. However, this research suggests that we should exert some control over our phone use, to minimize the potential negative impact on our children. But how? Here are three tips that might help you out.

1. Put your phone in another room when you’re trying to help your child learn something new

It’s hard to resist the temptation to check your phone when it’s right beside you and you hear the ping of an email notification—even during family time, even knowing that the phone might affect your child’s development and your own happiness. Kids learn best when responsive adults are teaching them because they can pay attention to the same thing at the same time together. Having a predictable rhythm during back-and-forth contact helps kids focus on what’s important.

The solution is simple: Put your phone in another room. Or, if that’s not possible, turn off your notifications.

2. Keep your phone in your back pocket when you’re at your kids’ games

Athletics are an important part of child development and more than half of American kids are involved in sports. Kids not only notice when parents aren’t available to them, they falter more than when a sensitive parent is watching and cheering them on.

When you’re on the sidelines of your children’s next soccer game, be available and responsive in a way that makes them understand they are in your spotlight. Stay positive, even about the opposing team, so that they feel that your encouragement of them is your primary focus.

“We should exert some control over our phone use, to minimize the potential negative impact on our children”

You might take out your phone to take pictures or text your spouse that the game’s almost over, but then put it back in your pocket. You can post those pictures on Facebook after you get home. Watch your kiddo, not your screen.

3. Reflect on whether your phone use might be related to conflict you’re having with your kids

Studies suggest parents who are engrossed in their phones tend to respond more harshly to their kids’ misbehavior. Children may be more inclined to engage in risky behaviors to get their parents’ attention, which might be linked to increased injuries when their parents are on their cell phones.

Is any of that happening in your house? Be honest. If it is, the solutions are self-awareness and intentionality. Instead of mindlessly checking your phone, you can do so only when you have a specific task to perform. Parents who aim to disconnect regularly from their cell phone and begin practicing mindful parenting may find that they have more positive interactions with their children as a result.

I vacillate between appreciating my smartphone and wishing I could teleport back to a time before phones. I’m probably in good company. There is no doubt that smartphones create valuable opportunities for social connection. Sitting at this coffee shop, I’ve also noticed a mom and her son posing together for a selfie as they enjoy sweet drinks, which no doubt helps them to feel closer. The trick for parents is to use their phones around their kids intentionally as often as possible—and that’s undoubtedly tough for a lot of us to do!