For decades, politicians and religious leaders have feared that the institution of marriage is declining. But is marriage really dying—or is it just evolving? 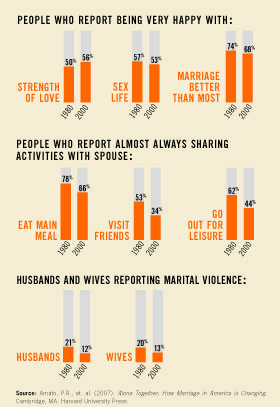 Four Pennsylvania State University sociologists tried to cut through overheated rhetoric and uncover the truth about contemporary marriage. They drew upon two national surveys, one conducted in 1980 and the other in 2000, which asked 2,000 randomly selected couples an identical set of questions about their happiness, household division of labor, social lives, gender roles and attitudes, and more. The results, published this year in the book Alone Together: How Marriage in America is Changing, challenge any simple verdict on the state of marriage today. While contemporary spouses spend less time with each other and have fewer connections to a wider community, in many important ways they are significantly better off than couples in 1980—a fact reflected in falling rates of divorce during the same 20-year period. “Marriage is changing, no doubt,” says Paul R. Amato, the book’s lead author, “but it certainly isn’t dying out.” However, Amato argues that traditional marriage, with a breadwinning husband and homemaking wife, “is being replaced by a form of marriage that is more egalitarian but also somewhat less cohesive.” Here, we present some of the results published in Alone Together, which provide a snapshot of contemporary marriage.