Despite the optimism of newlyweds, most marriages eventually end in divorce. Marriage counselors often advise couples to treat each other more affectionately, to express empathy, and to learn to compromise on each other’s behalf. This seems like reasonable advice, but for many people it also seems to be difficult advice to follow.

So thinking about marriage raises some general questions about the challenges of improving human behavior. How can we inspire people to act in each other’s best interests? How is it that people ever put the needs of others before their own, and how can we get people to do this more often? How, basically, can we get people to be nicer to each other? 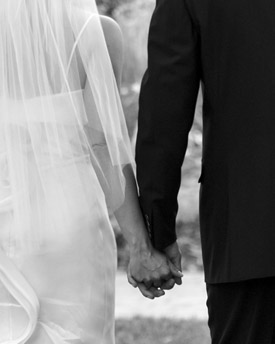 Both these views of human nature suggest that cooperative behavior is inherently fragile. Take away the constraints or the rewards, and cooperation should fall apart.

Our research has a very different take on human nature. As researchers who have devoted our careers to studying the first few years of marriage, we have focused on the phenomenon of compassionate love between spouses. We care about compassionate love because we expect it to inspire positive behaviors toward others, behaviors like self-sacrifice, tolerance, charity, and support. Compassionate lovers break free from the Hobbesian and the behaviorist worldview because compassionate lovers do these things even at a cost to the self, and even when they are not forced to do so by social constraints. Thus our attempts to identify the causes and correlates of compassionate love in marriage seem to be a step in a new and promising direction toward understanding positive human relations.

But is it so new? A second glance at definitions of compassionate love reveals a paradox, perhaps a contradiction, that brings us uncomfortably back to the behaviorists’ ideas. In current thinking, it is not enough for compassionate lovers to put the needs of others before their own. They have to delight in doing it. They have to be fulfilled by advancing the growth of another person. This does not sound selfless any more. Indeed, the behaviorists see an element of selfishness in even the most selfless behavior.

Compassionate love researchers do not really disagree with this. Current views of compassionate love do not preclude taking pleasure in the benefit of others, but rather feature that pleasure as a central element. In specifying what compassionate love is, then, the challenge is to figure out how to reconcile these elements of selflessness and self-interest.

Third, newlyweds are an appropriate place to distinguish between compassionate love and other kinds of love. As you might imagine, newlyweds all claim to love one another. We have interviewed hundreds of newlyweds, and when we asked them, “Do you love your partner?” they look at us like we’re crazy. They get offended by the question: “Of course, I love my partner. We just got married!” Furthermore, they tend to score high on every kind of love scale thrown at them. Newlyweds are passionate, companionate, they like and love each other, and when asked, they profess their undying willingness to make sacrifices for each other. And yet not all of these couples love each other in the same way. Studying newlyweds closely may suggest ways of teasing apart the compassionate lovers from the other lovers.

A model of compassionate love

What makes this love compassionate? Consider that if we truly believed that everything about our partners was fabulous, then loving them would not be very difficult. Loving a partner while seeing their weaknesses may represent a selfless act, in that spouses endure the costs of their partners’ faults, weaknesses, and limitations—but love them anyway. Compassionate love is personally fulfilling, in that spouses can reap the rewards of their love, but it is also selfless, in that spouses accept their partners for who they are, the good and the bad.

The goal of our research has been to identify spouses who compassionately love their partners and to examine the implications of compassionate love for marital well-being. To address these issues, we have been following 250 newly-married couples over the first four years of their marriage. When these couples were first married, we asked spouses not only to rate their current feelings about their marriage, but also to report on their global and specific evaluations of themselves and their partners. That is, we asked spouses whether they considered themselves and their partner to be good, worthy people, and we also asked them to rate themselves and their partners on numerous specific traits and abilities, such as intellectual ability, social skills, extraversion, and conscientiousness.

We found that virtually all spouses reported they were extremely happy with their marriage and that they held their partner in the highest regard. In fact, most spouses viewed their partners as better, more worthy people than even the partners viewed themselves to be. However, spouses varied significantly in the extent to which they understood their partners’ self-perceived traits and abilities. Thus, only a subset of these loving, newly-married couples seemed to be engaging in compassionate love, in which a globally positive view of the partner is linked to an accurate understanding of the partner’s specific strengths and weaknesses.

We also found a connection between spouses’ understanding of their partners’ traits and the quality of the couple’s interactions. We had couples engage in a series of tasks in which each spouse was asked to choose a personal problem or difficulty they were facing and discuss that problem with their partner. A panel of independent observers then rated the supportiveness of the partner’s behaviors during the discussion. Wives who displayed a greater understanding of their husbands’ specific traits were rated as providing better support to their husbands in these interactions than were wives with less understanding of their husbands’ qualities. Given that all couples reported being very happy with their partner and the marriage, these results suggest that caring for a partner may not be enough to provide positive social support. Instead, it seems that holding each other in high esteem while also understanding one another’s specific qualities may allow spouses to give both the loving encouragement and the specific information necessary to support a partner effectively.

Loving a partner compassionately also seems to contribute to marital stability over time. We found that when wives had a deeper understanding of their husbands’ specific qualities, the couple was less likely to divorce over the first four years of marriage. Importantly, this finding held regardless of whether the wives’ specific views of their husbands were positive or negative. In other words, it was only when wives understood their partner’s traits, not necessarily when they viewed those traits positively, that the marriage fared better over time.

Why did marriages only seem to benefit when wives understood their partners’ specific qualities? Husbands varied significantly in their understanding of their wives, such that some husbands understood their wives’ traits and abilities better than other husbands. However, husbands’ understanding was not associated with their support abilities or with couples’ likelihood of divorce.

The implications of knowing and adoring

Overall, these findings suggest that loving a partner compassionately may have important benefits for marriage.

First, compassionate love has benefits for the beloved. While it may be good to be the object of love, it is better to be the object of a love that is coupled with understanding. When spouses are both loved and understood, they are likely to get better support from their partners.

I agreed with you up to about half of the article. For
us, compassionate love though does not go in
accepting the weaknesses but in helping her/him go
beyond, work hard to grow, etc. No acceptance of
limitations but the courage to tackle the sensitive. If
you let your partner touch you in your most
emotionally sensitive points out of trust and if you are
willing as the partner to address the sensitive points
and not give up, that is love. Hope this adds a
dimension.