Twenty-five humanitarian aid workers sat with their eyes closed, bringing a kind awareness to their breath, body, emotions, and thoughts at a hotel by the Dead Sea in Jordan. Learning to bring greater awareness, balance, and connection to our life and work is hard enough for any of us, but how much more challenging for a group learning these skills just 350 miles from Aleppo.

They had recently arrived from the frontlines of the Syrian refugee crisis—Lebanon, Turkey, Syria, Iraq, and centers in Jordan—to take part in a contemplative-based resilience (CBR) training for aid workers. 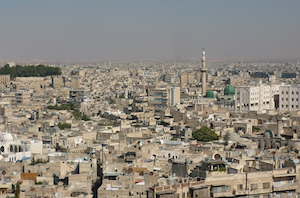 The responsibilities of aid workers in the Syrian crisis are extensive and challenging, including providing medical treatment to those injured, delivering food and shelter to displaced people and those in need, providing legal support, and ensuring that donor funds are spent responsibly and accounted for. They do all of this while being targets themselves, as evidenced by the horrific aerial bombing attack on a UN aid convoy in Syria in mid-September that killed twenty aid workers unloading food at a warehouse.

About two-thirds of participants in the training were from Middle East nations and working in the region, and Arabic was their first language; the other third were from Europe or North America and working in the region. Over four days, they explored practices of meditation, mindful movement, and ways of understanding and responding to stress that might provide them with valuable tools when they go back into their humanitarian roles.

The CBR program was created to respond to the growing challenges facing aid workers today. There are now more than 60 million refugees and displaced people around the world—the highest number since World War II. But levels of support for the estimated 250,000 aid workers have not kept pace, and more and more is being asked of those working in the humanitarian field.

While the demands placed on aid workers has increased, humanitarian workers have themselves become targets in ways that were almost unknown a generation ago: Attacks on aid workers grew from 41 in the year 2000 to 190 in 2014, and in that time 3,000 aid workers were killed, injured, or kidnapped.

As a result of these stresses and pressures of work, a growing number of aid workers are experiencing mental health issues: 79 percent of participants in a Guardian survey of 754 aid staff said they had experienced such conditions, including anxiety, depression, panic attacks, PTSD, and alcoholism. And one international medical aid organization reported that one-third of its staff drop out after just one assignment. At the same time, psychological and social support for aid workers, while often well-intentioned, is widely seen as inadequate.

The bottom line is that more aid workers are experiencing trauma and other mental health conditions, and leaving the field earlier. Aid groups are operating less efficiently with increased costs and higher turnover. And beneficiaries are receiving lower-quality care because of high staff turnover, and aid workers who are less-experienced and over-stressed.

The director of the CBR program, Emmett Fitzgerald, knows the problem from both sides. As an aid worker in Haiti, Democratic Republic of Congo, and Nepal, he helped manage the response to major emergencies. But, after months of assisting the post-earthquake response in Haiti, he had a moment where he knew the stress had gotten to him: After sitting at a nine-minute traffic light, ruminating on how he would be late for a group meeting with a domineering boss, he blew up in anger at a young child begging for food money. This was a wake-up call: “Who have I become?” he wondered. A year later, he was participating in a CBR training led by Sharon Salzberg and others in Cork, Ireland.

Participants in the Jordan training shared stressors like Emmett’s, including security risks and emergencies, high workload, extensive travel often in difficult conditions, separation from friends and family, instability of funding for projects. All of this on top of the work challenges faced in other fields, such as an overwhelming number of emails, work/life balance, and difficult colleagues, bosses, and staff. One woman, who had worked for six years for a large aid NGO, also spoke of the feeling of helplessness that some aid workers experience—faced with the gap between the dire needs of the populations they serve and what they are able to provide. This can lead to feelings of guilt and shame for their relative privilege and their inability to do more.

Why “burnout” isn’t a failure or a pathology

Ola Witkowska, a mental health specialist for Doctors Without Borders (MSF) who recently returned from missions in South Sudan and Iraq to provide support to aid workers in the field, led the psychosocial part of the Jordan training and shared her reflections on the CBR program:

For me, a great strength of the CBR approach is in bringing together the understanding of stress and how we can build resilience in the face of the inevitable stresses of life and work, with experiential practices—both formal and informal—that can help build awareness, cultivate greater balance, and strengthen connection with others. These are practices that I engage in myself—and notice when I don’t—and I’ve seen their value for myself and in my work with others.

Stephanie Kohler, who led the mindful movement area of the CBR training, highlighted the importance of movement in the CBR approach:

Intentional, directed movement is an essential component of mindfulness. In the CBR training, we discuss alternative ways to react to both chronic and acute stress. In my teaching, I emphasize that the body provides constant information. From that awareness, participants can use mindful movement to engage the parasympathetic nervous system, which assists in managing and recovering from stress, and thus builds resilience. Mindful movement is not only effective, but also readily available.

The CBR program typically brings together 20-30 participants from a variety of aid groups for a training in an environment that is relaxing and restful and allows ample opportunity for participants to spend time with and get to know each other. The aim is to give participants skills and tools to build their own resilience and provide follow-up support for them. The goal, over time, is to help build a culture of support for these practices in their organizations and more broadly in the humanitarian aid community.

One participant shared that what she appreciated most about the training was the kindness and non-judging attitude that was built into the program and the way “burnout” was treated not as a failure or pathology but as an understandable response to stress, particularly where skillful tools and resources are not available.

The goal of the CBR program is ambitious, says Fitzgerald, “We want to change the way organizations treat their staff—to recognize that their staff are their most important resource. We want aid organizations to invest in the well-being and longevity of their staff, acknowledging that their beneficiaries deserve the support of passionate and clear-thinking aid workers and that passion and clarity are eroded by unaddressed stress.”

We believe there is a moral and ethical argument for these kinds of support—as well as a bottom-line justification. Programs like CBR can help organizations reduce medical and insurance costs, minimize the loss of staff and institutional knowledge, and lower recruitment costs. And while in the business world these savings might go to an owner or shareholders, in the humanitarian field they can go to support the enormous needs of refugees and displaced people. We believe it is a winning formula all round.

A key insight that all areas of the CBR program seek to reinforce is that the way we meet our stressors and the difficulties of life is an important determinant of our suffering and our happiness. Many participants take away with them Viktor Frankl’s powerful reminder: “Between the stimulus and the response is a space. In that space lies our ability to choose. In our ability to choose lies our growth and our freedom.” Aid workers leave the program with intentions and practices to support themselves and their colleagues in their challenging and essential work.

CBR trainings have taken place in Ireland, the United States, Rwanda, and Jordan. Four more trainings are planned in Jordan for 2017 to facilitate support and accessibility for refugee aid workers in the Middle East region. To learn more about the CBR program, visit the Garrison Institute website. To make a donation to support the program and make it more widely available for aid workers, visit: http://www.changingaidwork.org.

This article was originally published on Mindful. Read the original article.