How many times to you take a break from work to check out a funny video online or to browse the web for a new product? If you’re like many Americans, you probably do this several times a day if not several times an hour. Or, maybe you’re more the type who always has your cell phone on, so you can catch every new text or email, hoping for that quick dopamine high to release you from your boredom. 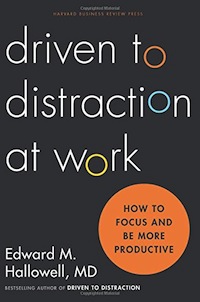 Our need to distract ourselves from focusing on work has become epidemic in America, and it’s one of six distraction “syndromes” recounted in Edward Hallowell’s new book, Driven to Distraction at Work: How to Focus and Be More Productive. Hallowell, a former Harvard Medical School faculty member and renowned expert on ADD and ADHD, has written a how-to guide for counteracting different forms of distraction at work that can drag us down and keep us from fulfilling our potential.

Hallowell believes that, outside of people diagnosed with ADD or ADHD, many adults have situational problems staying focused—something he calls ADT or “Attention Deficit Trait”—based, in part, on their individual psychology. For example, someone who multitasks to the point of exhaustion (another syndrome) may have gotten the message early on in life that being a “good” person means being perfect. Looking at how childhood messages or underlying emotions trigger certain distraction syndromes, Hallowell counsels, can help people see their way out of these destructive behaviors.

In the book, he outlines six primary distraction syndromes:

For each type of syndrome, Hallowell provides stories of people tripped up by the syndrome along with tips for how to make one’s way out of them.

I admit that most of these seemed a bit overly simplistic to me, though. For example, on the chapter explaining the pitfalls of multitasking, Hallowell suggests things like using particular wording when refusing a task, telling yourself why it’s OK to say “no,” and learning to delegate more. These would have carried more heft, perhaps, if he had written more about the research behind giving that particular advice or more knowingly about how hard it is for people get out of these ruts easily.

The book gets a little more compelling when he moves into writing about the research on focus. An important and often overlooked way to increase focus is to take better care of our bodies and minds by getting enough of the basics—food, sleep, and exercise—as well as practicing meditation, giving ourselves occasional cognitive challenges, and nurturing our social connections.

He also suggests that we work from our “sweet spot”—the place where we are doing what we love and what we are good at doing—and try to structure our time and our work environments so that we can get into a groove that will prime out minds in the right direction. For example, he advises that it’s much easier to say “no” to someone when we have a routine in place that precludes us from saying “yes.”

Though the book has its merits and will appeal to some—especially those who are fans of Hallowell’s best-selling book, Driven to Distraction—it’s not for those who are sticklers for research. Still, if you want a self-help book from one of the masters, this might be the right book for you.