What did the pandemic teach us about work? For many, it illuminated how essential certain jobs are in keeping our society running, and it shined a light on the pernicious burnout that existed among health care workers even before the first COVID case. 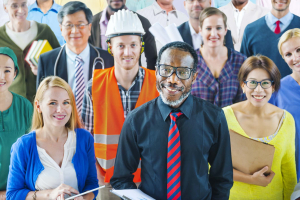 It reminded us that workers are also human beings with personal lives, which they can’t always keep separate from their work lives (or Zoom video screens). And just as illness can interfere with our ability to get our jobs done, so can mental health issues.

So, almost 2.5 years into the pandemic, how is our mental health at work? This spring, the American Psychological Association (APA) commissioned a survey of over 2,000 adults in the U.S. who were working full-time, working part-time, or self-employed. They answered questions about how they were feeling at work and which aspects of their work environments were helping or hindering their well-being.

Their responses point to a few key areas where organizations might focus to better support their workers—and they highlight how inequalities shape well-being on the job.

There may be some recent progress in how mental health is addressed at work, because over 70% of respondents believed that their employer was more concerned about employee mental health than in the past.

Hopefully this concern persists, because it seems to be important to today’s workers. In fact, 81% said that they would be looking for workplaces that support mental health in future jobs.

“Employers should consider mental health initiatives as a way to recruit and retain talent,” the report says.

The kind of mental health supports people want include flexible hours and remote work, a workplace culture that respects time off, and a four-day workweek.

2. Office workers are faring better than other professions

Most of the respondents to the APA survey fell into three categories: office workers, manual laborers, and service workers (people who interact with customers, clients, or patients, including food and retail workers, teachers, and health care workers).

While only 15% of office workers describe their work environment as toxic, that number is above 20% for both manual laborers and service workers. And the pandemic seems to have inspired more positive changes in office environments compared to the other fields.

More office workers say that their work schedules—including how much they work and how flexible their hours are—have improved during the pandemic, and more manual laborers and service workers say their schedules have gotten worse. In the realm of mental health initiatives, the survey found, manual labor has seen relatively fewer improvements during the pandemic, and more service workers have seen these initiatives degrade.

3. People are often scared at work

Work should be a safe place, but large numbers of employees report feeling frightened often at work. These numbers are higher for Black (29%) and Latino (31%) adults, and for younger workers.

What makes people scared? The threat of COVID-19 is one possibility. Also, “it might be that [they] are employed in physically dangerous jobs, such as first responders or certain forms of manual labor that involve heights, dangerous equipment and materials, or other hazards,” says Dennis Stolle, APA’s senior director for applied psychology. “Or it might be that [they] are afraid of the possible behaviors of their coworkers, customers, or even managers.” More research is needed, he says, especially because of the disparities in who feels fearful at work.

4. Concerns about compensation may be hurting well-being

With the U.S. inflation rate on the rise throughout the pandemic, 71% of workers are worried that compensation has not kept up with inflation. And these workers—compared to those who aren’t worried—are more likely to say that work is hurting their well-being, feel tense or stressed often, and want to quit.

Low pay was a leading reason why U.S. employees quit their jobs in 2021, which should make this trend even more concerning for employers.

5. People feel worse when their employer is monitoring them

Employee monitoring is common, with more than half of the respondents’ employers using computers, cameras, and other technology to keep an eye on them.

Despite all these challenges at work, an overwhelming 91% of Americans surveyed are somewhat or very satisfied with their jobs.

When asked about specific aspects of work, over 80% said they were satisfied with their work schedules, opportunities to be innovative or creative, how well their workplace is preparing them for their industry’s future, the communication they receive from their employer, and opportunities for growth and development.

“Employers . . . should look for opportunities to make improvements and listen to feedback from workers,” the report says. At the same time, workers’ priorities have been shifting since the pandemic began—which means we’re all still figuring out what work should look like in the future.