All of us will encounter the medical care at some point in our lives. We want those who take care of us to be able to help—to listen, diagnose, make recommendations, and support us in our healing. We expect them to be at the top of their game.

Yet doctors are human and subject to the same myriad of emotions we all feel. Stress, anger, depression, hopelessness, disgust, fatigue—all of these can affect their ability to care for their patients, and to care about their patients. 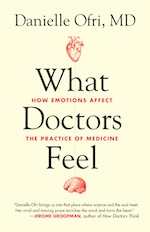 In a new book, What Doctors Feel: How Emotions Affect the Practice of Medicine, physician Danielle Ofri explains the role emotions play in medical care. From the intern who panics at the thought of seeing his first patient, to the oncologist who experiences grief when a patient in her care dies, Ofri uses examples from real life—including her own experiences practicing at a large public hospital in New York—to illustrate the challenges doctors face in managing their emotions under life-and-death circumstances.

Starting from the third year of medical school on, a doctor’s empathy toward patients declines steadily over time. There are many possible reasons for this—including stress from long work hours and lack of sleep, disillusionment over the practice of medicine, and feelings of inadequacy, for example. But whatever the cause, Ofri argues, doctors who develop a cavalier, uncaring attitude toward patients will have more problems diagnosing and treating them. And, studies show, they will likely face more resistance from patients around following treatment protocols, as well as higher incidences of malpractice suits.

A doctor’s emotional state can affect his or her ability to think on the job, writes Ofri, particularly in those cases that are puzzling or difficult. Since positive emotions lead to a “more global view of a situation” and “more flexible problem-solving,” while negative emotions “tend to diminish the importance of the bigger picture in favor of the smaller details,” it’s important for doctors to monitor their own emotions and to recognize the impact that negative emotions may have on their ability to diagnose and treat their patients.

These emotions can include anger, frustration, sorrow, grief, and even shame. Most physicians will make a medical error at some point in their lives. Yet feelings of shame—in addition to the threat of lawsuits—keep them from admitting those errors and apologizing to their patients, not to mention admitting them to colleagues who might benefit from that information.

In addition, doctors working in particular areas of medicine—like oncology or emergency room work—are bound to lose patients they’ve treated, making loss and grief a part of their everyday work experience. Doctors can also get very angry at their patients, particularly those whose issues the doctor considers “self-inflicted”—like obesity or drug abuse—or those who won’t follow advice. Difficult emotions like these can be the undoing of a competent physician, she argues, and should be a focus of attention and care, whenever possible.

“The most distant, aloof doctor is subject to the same flood of emotions as the most touchy-feely one,” Ofri writes. “But how we doctors choose—or choose not—to notice and process these emotions varies greatly. And it is the patient at the other end of the relationship who is affected most by this variability.”

Perhaps what’s most refreshing about Ofri’s book is that she doesn’t sit on the sidelines and point fingers. She admits to empathy gaps in her own practice, such as when patients treat her with disdain or when they exaggerate their symptoms. She has laughed at gallows humor and found herself missing important clues about a patient’s health risks because of prejudices toward certain types of patients, or because of her own emotional overload. These admissions help us see the humanity in her and empathize with other doctors who struggle to balance their own emotional needs with those of their patients.

Though Ofri is a thorough and compassionate chronicler—and her book a fabulous read—she doesn’t offer much in the way of prescription. She does note, however, that doctors can reduce stress through mindfulness practices, and can be role models of empathic care and concern for younger doctors coming up through the ranks.

She also writes about changes happening at some hospitals and medical schools that reflect concerns for a doctor’s emotional life. For example, a program at one Florida hospital has devoted considerable resources to offer private counseling and group activities that help doctors cope with emotional stressors and boost staff morale. Though not a panacea, a program like that does send a message to doctors that attending to their emotional wellbeing is as much a part of their job as honing their medical skills. And that translates to better care.

“Paying attention to emotions within the doctor-patient interaction doesn’t guarantee healing, no doubt,” writes Ofri. “But ignoring them surely makes it less likely.“