Matt Dailey, a software engineer for a data management company, was managing a team with an engineer who wasn’t performing well. This was clear to Dailey—and to the employee. Yet, as I describe in my new book Mastering Community, Dailey said he “wasn’t bridging the gap of how to make the situation better.” His team missed their deadline. 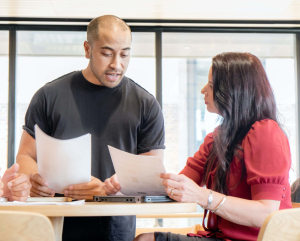 Dailey realized part of the problem was his inability to provide the kind of feedback this employee and their team needed. He explained, “I just didn’t have the tool set to do it—to have the conversation—at that point.”

Giving and receiving feedback at work can be challenging. It didn’t help that Dailey worked in a culture of what author and CEO coach Kim Scott calls “ruinous empathy”—which occurs because you want to spare other people’s short-term feelings, so you don’t tell them things they need to know about themselves. Dailey wasn’t getting the necessary feedback from his boss, or the person who worked with Dailey’s boss. His professional network lacked the tools that would have allowed them to discuss structure, deadlines, and competencies directly.

The ability to give and receive appropriate feedback is key to your development, as well as the development of your team or organization. Research (including some that I’ve done myself as a professor at Georgetown University’s McDonough School of Business) has uncovered many ways that feedback can increase our well-being at work, improve performance, and deepen our relationships—as well as better ways to share feedback with each other.

The benefits of feedback at work

A person who receives constructive feedback stands to benefit by becoming more competent. Feedback typically leads to improved decision-making and collaboration, as well as increased productivity and performance. And this benefits not just the individual, but the team as a whole because they have the advantage of a stronger contributor. The snowballing of these benefits, from individual to workplace, can have huge consequences.

In my study of over 20,000 people across industries and organizations with Tony Schwartz, we found that higher levels of feedback are associated with 89% greater thriving at work, 63% more engagement, and 79% higher job satisfaction. People who receive more feedback are also 1.2 times more likely to stay with the organization.

Positive feedback that comes in the form of recognition of the contributions of individual members is one of the best ways to boost morale. It’s also a way to make members feel a part of the workplace, which affects the likelihood of their staying with the organization. A 2015 Gallup survey found that 67% of employees whose managers focused on their strengths were fully engaged in their work, as compared to only 31% of employees whose managers focused on their weaknesses. IBM’s WorkTrends survey in 2013–2014 of over 19,000 workers in 26 countries, across industries and (thousands of) organizations, revealed that employees who receive recognition are almost three times more engaged than those who do not. The same survey showed that employees who receive recognition are also far less likely to quit.

For example, in 2015 LinkedIn launched Bravo!, a recognition and rewards program in which peers can recognize a colleague for their contributions and for living the organization’s core values. The data showed not only the ripple effect that occurs in terms of performance (54% of employees who received three or more awards showed a year-over-year increase on their performance rating), but the transformation of praise recipients into praise providers. As people became happier and more engaged, they became part of the process of making their colleagues more positive and engaged, too. 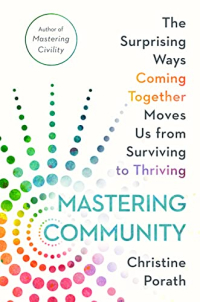 Excerpted from the book Mastering Community: The Surprising Ways Coming Together Moves Us from Surviving to Thriving by Christine Porath. Copyright © 2022 by Christine Porath. Reprinted with permission of Balance, an imprint of Grand Central Publishing. All rights reserved.

Giving each other honest, careful feedback creates deeper, more fulfilling relationships. As members of the team help one another improve and hold each other accountable, they create a feedback loop in which each person both gets and provides useful feedback. The more this happens, the stronger the connections among team members, with those who receive this feedback feeling that those who provide it are partners or coaches who have a personal stake in their development. The workplace thus becomes an incubator, a safe, protected space, within which its members can grow stronger.

Positive feedback, or recognition, makes team members feel valued, reduces power and status differences between them, and may increase everybody’s sense of belonging. Although recognition costs virtually nothing, it’s one of the tools that is most underutilized by leaders and their organizations. A mere 42% of the over 20,000 people we surveyed believed that their manager recognized and appreciated their work.

How to improve feedback delivery at work

Here are some tips on how to give feedback in a constructive way, several of which are highlighted by organizational psychologist Adam Grant.

Don’t give the “feedback sandwich.” Though many of us like to open with a compliment and end on a high (positive) note, putting the negative meat in the middle may mean that it gets lost in the feedback sandwich, Grant explains. Why? One potential problem is that we often remember the first and last things we hear in a conversation. The criticism in the middle may get buried. Another problem is that many of us are anticipating a negative—we’re accustomed to receiving negative feedback, especially in a conversation about our performance. When we hear praise, Grant says, we often begin to brace ourselves such that we fail to appreciate the initial positive. We may think that compliment is meant to soften the blow.

Instead, use radical candor. According to Kim Scott, radical candor requires that you show that you care before you offer a critique—her shorthand for this is “caring personally while challenging directly.” You can show you care by acknowledging others, listening attentively, and thanking people.

Explain why you’re giving this feedback. Starting with your intention can lower defenses, Grant explains. In one study, researchers made feedback 40% more effective by prefacing it with this: “I’m giving you these comments because I have very high expectations and I know that you can reach them.” If you’re giving feedback at home, psychiatrist Edward Hallowell offers something similar to use with children: “I’m asking more from you because I know you have it in you.” He explains that you want to challenge, but not in a punishing way.

Level the playing field. People naturally feel threatened by negative feedback. To minimize this reaction, Grant suggests you make yourself vulnerable and human. You might say something like, “I’ve grown a lot from managers’ and friends’ feedback, and I’m trying to pay that forward.” Or “Now that we’ve worked together, it would be great if we could help each other improve by providing feedback.”

Ask if they want feedback. For example, “I noticed a couple of things about your work recently. Are you interested in some feedback?” If people take ownership of receiving feedback, Grant says, they will be more open to it and less defensive.

If you see a problem, offer feedback immediately or shortly thereafter, depending on the situation. The sooner the better, because people may not remember the situations you’re describing.

If at all possible, deliver any negative feedback in private rather than in public. Positive feedback delivered in public is typically welcome, and it’s a good way to reinforce behaviors you want. However, some people are embarrassed and uncomfortable with public feedback. If you’re unsure, ask them.

Pay attention to your non-verbals and facial expressions when you deliver feedback. How you say things is just as important as what you’re saying. Researcher Marie Dasborough studied feedback by observing two groups—one whose members received negative feedback accompanied by positive emotional signals such as nods and smiles, and the other whose members received positive feedback delivered critically, with frowns and narrowed eyes. People who received positive feedback accompanied by negative emotional signals reported feeling worse about their performance than participants who received good-natured negative feedback. The delivery of feedback can often be more important than the message itself.

Researchers Teresa Amabile and Steven Kramer have shown that a sense of progress is the most powerful motivator in the workplace, even stronger than personal recognition or pay. Encourage people’s strengths by providing your coworkers with specific feedback on how they are helping your team or community. Focus on how you deliver the feedback. By providing compassionate candor, you can ignite your team members, helping them—and you—thrive.