Since so many books have come out recently touting the benefits of mindfulness on health and happiness, it’s hard to get excited about them unless they offer something a little different.

That’s why two new books—The Mind’s Own Physician and New World Mindfulness—caught my attention. Both books have something new: insight into why Americans have become fascinated by this Eastern phenomenon. 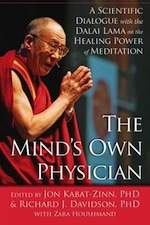 In The Mind’s Own Physician, edited by two world-renowned researchers, Jon Kabat-Zinn and Richard Davison, you can read about how Western doctors, neuroscientists, and psychologists are discovering the healing benefits of mindfulness and expanding on the concept of the mind-body connection.

The book is an account of the 2005 Mind and Life Institute dialogue on meditation and its clinical applications—one in a series of organized dialogues that started about 25 years ago, when the Dalai Lama began meeting with scientists to learn more about their methods and discoveries and to converse with them about the nature of the mind.

To read The Mind’s Own Physician—and any of the books that have come out of these dialogues—is a little like being at the edge of discovery. Through edited versions of the actual conversations, you learn what science is revealing about the benefits of mindfulness and the questions that have emerged from these findings, such as how do the brain and the mind intersect or how can mental exercises mediate pain?

You also get to witness the Dalai Lama in action—pushing scientists to think more deeply about the implications of their findings and encouraging them to find ways to expand the reach of their work to the general public.

But as innovative as the Mind and Life dialogues are (and were), they are not the first time mindfulness has intrigued Western intellectuals, at least not according to New World Mindfulness: From the Founding Fathers, Emerson, and Thoreau to Your Personal Practice, by Donald McCown and Marc Micozzi. 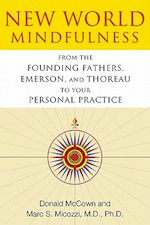 In this fascinating book, the authors trace the influence of Eastern meditation practices in the West from our early history to the present. We see how figures like Thomas Jefferson, Henry Thoreau, and William James—a preeminent psychologist from the 19th Century—were all exposed to Eastern philosophy and how it shaped their beliefs and commitment to bettering society. Apparently, many of our great Western thinkers were on to the benefits of meditation—or contemplative practices, at least—long before the scientists got to it.

After the book lays down that early history, the authors go on to give detailed accounts of ways people can incorporate meditation practices into their daily lives. Though many of these practices have been written about before—body scans, mindful breathing, walking meditation, etc.—the Western historical context provides a little extra intrigue to the instructions.

And for those who’ve thought mindfulness is just too “foreign” or who need that extra push to give it a try, this book might just do it for you. After all, if Jefferson and Thoreau tried it, it can’t be all bad.

Thanks so much for these titles. Will look into both.