A lot of parents believe that their children are either born with artistic talent or they’re not. But research suggests that artistic creativity, along with other kinds of creativity, is more of a skill than an inborn talent, and it’s a skill parents can help their kids develop.

Many researchers believe we have fundamentally changed the experience of childhood in a way that impairs creative development. Toy and entertainment companies provide an endless stream of prefab characters, images, props, and plotlines that allow kids to put their imaginations to rest. Children no longer need to pretend a stick is a sword in a game or story they’ve imagined; they can play Star Wars with a readymade light-saber, in costumes designed for the specific role they’re playing. 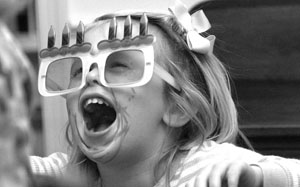 But researchers have also identified steps we can take to help kids tap into their own creative potential. Drawing on that research, here are some ideas for fostering creativity in kids.

Perhaps most importantly, research shows that fostering creativity in our kids will help them with more than art: Creativity is essential to science, math, and even emotional intelligence. Creative people are more flexible and more successful problem solvers, making them better poised to take advantage of new opportunities. So when we nurture the artistic lives of our children, we give them the tools they need to thrive in our rapidly changing world.

We have a new book (2012) that helps parents
develop creative thinking skills with their children.
It’s full of the latest research, stories of success based
on more than 50 years of experience, and a field
guide of many activities to use at and around the
home.