Teachers, parents, and politicians regularly bemoan the quality of America’s public school system. The news is full of stories of illiterate high school graduates, weapons and drugs on campuses, and “impossible children” who are incapable of being taught. In early 2002, the Bush Administration launched its attempt to reverse these trends with the No Child Left Behind Act. Before the act even became law, it was widely criticized for, among other things, relying heavily on standardized tests to determine whether a school or school district receives a carrot or a stick. More than three years later, these criticisms have only intensified.

James Comer crystallizes many of the law’s flaws in his recent book, Leave No Child Behind. For one, he says, increased reliance on testing means more class time must be spent teaching to tests instead of helping kids develop general skills they’ll need to be productive adults. Comer calls this the “brains on a stick” teaching method, since it only teaches facts to children and “ignores their feelings, relationship needs and capacities, dreams, and aspirations.” But Comer’s book goes much further than restating the problems with No Child Left Behind: He presents a viable alternative. 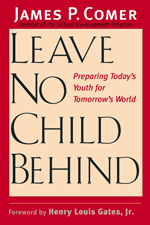 Over the past 37 years, Comer, a child psychiatrist at Yale University’s School of Medicine, has been developing what he calls the School Development Program (SDP), and what many educators and policymakers call the “Comer Program.” A pioneering program in the growing educational movement of social and emotional learning, the SDP starts from the principle that building strong relationships is the only way to help children become successful in life as well as in school. To Comer, there are no “impossible children.” Instead, he believes that given the right conditions in schools, all children can reach high levels of academic achievement.

Leave No Child Behind is Comer’s overview of his program’s development and promise. After tracing his own childhood in working-class East Chicago, Indiana, he describes the SDP’s start in two New Haven elementary schools in 1968 and lays out its intricate framework. The program is centered around three teams, one made up of teachers, parents, administrators, mental and physical health staff, and nonprofessional staff; one solely of parents; and another team comprised of sup¬port professionals such as social workers, psychologists, and nurses. The teams focus their diverse perspectives on the unified goal of cultivating a positive, responsive, and democratic school community.

The program seems complex on paper, but its results speak clearly. It now exists in elementary, middle, and high schools in 20 states, from Colorado to Florida, and has shown dramatic improvements in many schools, often in as few as five years. Test scores rise dramatically, but even more importantly, students are more focused, engaged, and better behaved.

Though occasionally hampered by awkward and jargon-laden prose, Comer handily makes the case that his School Development Program holds worlds of potential for students of all races and classes. As the backlash against No Child Left Behind mounts, his is a welcome voice urging cooperation and exploration. And most importantly, he offers a plan with real promise to improve the lives of children well beyond their time in the classroom.

It broke my heart to see creative, bright teachers giving up and “teaching to the test” - but you were a fool if you didn’t. It sounds like the alternative approach in Leave no Child behind actually works.