Wouldn’t it be great if you could walk into a store and buy lifelong happiness? The idea’s not as fanciful as it sounds—as long as whatever you buy is meant for someone else.

Two recent studies suggest that giving to others makes us happy, even happier than spending on ourselves. What’s more, our kindness might create a virtuous cycle that promotes lasting happiness and altruism. 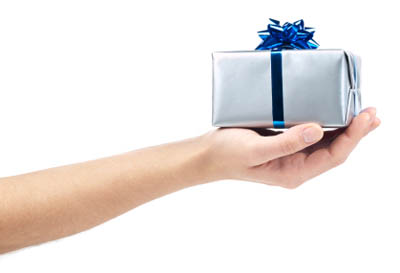 In one of the studies, published last year in the Journal of Social Psychology, researchers in Great Britain had participants take a survey measuring life satisfaction, then they assigned all 86 participants to one of three groups. One group was instructed to perform a daily act of kindness for the next 10 days. Another group was also told to do something new each day over those 10 days. A third group received no instructions.

After the 10 days were up, the researchers asked the participants to complete the life satisfaction survey again.

The groups that practiced kindness and engaged in novel acts both experienced a significant—and roughly equal—boost in happiness; the third group didn’t get any happier. The findings suggest that good deeds do in fact make people feel good—even when performed over as little as 10 days—and there may be particular benefits to varying our acts of kindness, as novelty seems linked to happiness as well.

But kindness may have a longer, even more profound effect on our happiness, according to the second study, published online in the Journal of Happiness Studies in April and conducted by researchers at Harvard Business School and the University of British Columbia.

Researchers then gave the participants small sums of money and two basic choices: They could spend it on themselves (by covering a bill, another expense, or a gift for themselves) or on someone else (through a donation to charity or a gift). Choose whatever will make you happiest, the researchers told them, adding that their choice would remain anonymous, just in case they felt pressure to appear more altruistic.

The researchers made two big findings. First, consistent with the British study, people in general felt happier when they were asked to remember a time they bought something for someone else—even happier than when they remembered buying something for themselves. This happiness boost was the same regardless of whether the gift cost $20 or $100.

But the second finding is even more provocative: The happier participants felt about their past generosity, the more likely they were in the present to choose to spend on someone else instead of themselves. Not all participants who remembered their past kindness felt happy. But the ones who did feel happy were overwhelmingly more likely to double down on altruism.

The results suggest a kind of “positive feedback loop” between kindness and happiness, according to the authors, so that one encourages the other.

“The practical implications of this positive feedback loop could be that engaging in one kind deed (e.g., taking your mom to lunch) would make you happier, and the happier you feel, the more likely you are to do another kind act,” says Lara Aknin, a graduate student in psychology at the University of British Columbia and the study’s lead author. “This might also be harnessed by charitable organizations: Reminding donors of earlier donations could make them happy, and experiencing happiness might lead to making a generous gift.”

I was hoping we might take this a little further. For example, what do we see when we test these subjects with a functional MRI or EEG? Is there any difference in brain activity among the more altruistic/happier group? In particular, what’s happening in the prefrontal cortex, and on which side?

Also, it is well known that skilled Buddhists practicing a loving-kindness meditation exhibit high-frequency Gamma waves, around 40Hz, and remarkable brain synergies. Do we see a tad more Gamma in the EEG scans of our happy givers? If so, would inducing Gamma waves through entrainment techniques lead to more altruistic behavior?

that’s a good phrase to spot