One day this past spring, Harvard University psychologist Jennifer Lerner discovered that a student of hers had suffered a relapse of a severe form of cancer. The news made her terribly upset; as she was walking home at the end of the day, she felt overcome by a wave of sadness.

But just beneath that sadness was another feeling, an urge that crept up on her as she was thinking about her student. 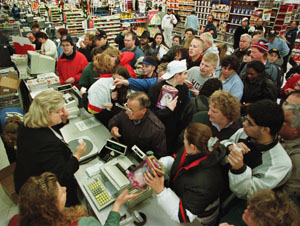 “I wanted to stop off at stores and buy things for my house,” she says. “It was so bizarre, but it was very hard to overcome—the urge to go shopping right then and there.”

The urge may have seemed odd, but it’s not uncommon. In fact, a recent line of research has uncovered a strong connection between feelings of sadness and a willingness to spend money on stuff—more money than people would pay for the same stuff if they weren’t sad. It seems that when we’re feeling down, our purse strings become a lot looser.

Lerner has been at the fore of this research. In a study published earlier this year in Psychological Science, she and her colleagues gave participants $10 and showed some of them a sad movie clip—a scene from the 1979 Ricky Schroder-Jon Voight tear-jerker, The Champ. Then the researchers had those participants describe how they’d feel if they found themselves in a situation like the one depicted in the clip. The rest of the participants watched a video about the Great Barrier Reef and wrote about their daily activities. Then all the participants were given the chance to buy a “sporty” water bottle.

The group that watched The Champ reported feeling significantly sadder than the other group—and they were willing to spend roughly four times as much for the bottle, $2.11 vs. $0.56.

The results corroborate findings from an earlier Psychological Science paper, on which Lerner served as lead author. In that 2004 study, participants were willing to spend more when they were feeling sad, but not when they were feeling disgusted. Both studies’ results are consistent with research from the 1990s that linked depression with compulsive shopping.

“It seems as though, somehow, there are some profound, deep connections in the human mind, such that sadness makes us want to acquire new things,” says
Lerner.

But the latest study, titled “Misery is Not Miserly,” distinguishes itself from earlier research by suggesting why sadness may induce excessive spending. The authors found that in order to affect spending habits, it wasn’t enough for people just to feel sad. They also had to be thinking about themselves more, experiencing what the authors call “self-focus,” something that’s usually, though not always, triggered by sadness. In the study, people were deemed high in self-focus if they frequently used pronouns like “me,” “myself,” and “I” in their writing assignment. 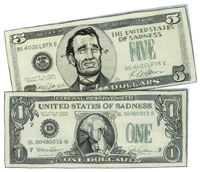 The authors hypothesize that the combination of sadness and self-focus makes people dwell on their shortcomings—on some unconscious level, they feel “devalued,” says Cynthia Cryder, a professor of psychology at Carnegie Mellon University and the study’s lead author. In response, they have an unconscious desire to acquire things—including material goods—that they hope will increase their self-worth.

“It could be that sadness is defined by a sense of loss,” says Lerner, “and it triggers this implicit goal to replace loss.”

The authors stress that this is different from the idea of “retail therapy,” a Sex in the City-style shopping spree intended to cheer oneself up from some misfortune. Rather, the connection they’ve uncovered between sadness and spending operates on an unconscious level.

Research has yet to determine whether this process actually works—that is, whether spending effectively reduces feelings of sadness. But even if it does, feeling better about oneself could come at a hefty price.

“At a macro level, the amount of money implicated in the effect is not trivial,” says Lerner. “This is not just sort of an ‘Oh, isn’t that interesting?’ finding. There are potentially massive potential implications of this.”

Lerner points out that Americans currently spend 70 percent of their national income on consumer goods and services, up from 63 percent in 1980. Rates of consumer spending have increased steadily over the past 25 years, according to the Bureau of Labor Statistics, and consumer debt in the United States now tops two-and-a-half trillion dollars, more than three times as much as it was 15 years ago, according to the Federal Reserve.

Of course, says Lerner, “many factors influence consumer spending”—including the availability of credit and increasingly savvy and pervasive marketing—but sadness might be one of them. She adds that this could be especially true for certain groups of people, such as widows who have to make huge financial decisions while they’re still grieving.

Ronald Dahl, one of Lerner’s co-authors on the “Misery is Not Miserly” study, suggests that sadness could also be easily exploited by marketers to the disadvantage of many consumers, especially because the effects of sadness can snowball.

“Imagine some advertiser has somehow conveyed to you that getting certain products may make you feel better,” he says. “Then the bills come due and you actually don’t feel better about yourself. You actually feel worse, because now you’re further in debt. That sadness then makes you willing to pay more.”

Dahl, the Staunton Professor of Psychiatry and Pediatrics at the University of Pittsburgh, speculates that this “negative spiral” originates in a cultural myth that buying things for oneself will make one happy—a lesson reinforced in media images and other cultural representations of wealth and success. But he points to research, such as a study published this past March in Science, showing that when people spend money on others, they actually feel happier than after spending it on themselves.

So perhaps the best way to address the sadness spending effect, suggests Dahl, is to teach people, from a young age, that the path to personal fulfillment lies in generosity and altruism, not “selfish consumerism.” That way, the feelings of loss brought on by sadness might spur a desire to give to others, avoiding the negative spiral brought on by indulging oneself.

“It’s basically a new pattern of thoughts, feelings, and actions together in the brain,” he says. “It means shifting away from self-focus toward being generous, giving to others—and discovering the rewards, in real emotional terms.”