The children are jostling each other on the carpet in Nichole Hosty’s first grade class at Wilson Hills Elementary School in Worthington, Ohio.

“OK, everyone! I need you to sit quietly! Let’s all sit crisscross applesauce!” says their guidance counselor, Jennifer Hegerty. Gradually the children settle down and begin to focus on Hergerty’s lesson for the day—the second lesson in the Second Step curriculum. 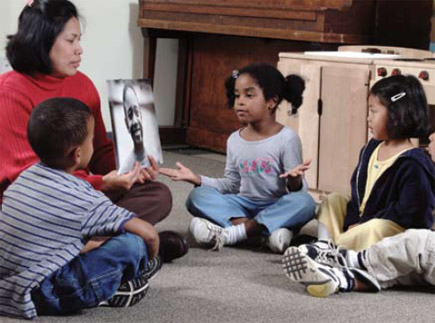 Kindergarten students participate in a Second Step lesson. The program is currently used in roughly 25,000 schools throughout the United States and Canada. © Michael Ziegler/Second Step

For the next 20 weeks, these children will learn skills of empathy, anger management, and moral decision making. But their Second Step education will build upon the lesson Hegerty is teaching today, helping the kids identify, understand, and manage their own feelings.

While Second Step is one of many programs around the country that teach students social and emotional skills, few of them have been as widely implemented or rigorously evaluated as Second Step. Developed by the Committee for Children—a nonprofit in Seattle devoted to helping kids foster emotional well-being—Second Step is now in its 21st year and has been taught to more than nine million children in North America. The program is currently used in roughly 25,000 schools throughout the United States and Canada; researchers have tested it extensively and helped to spread the curriculum.

Second Step has programs for preschool through eighth-grade classrooms. At all age levels, however, each curriculum focuses on helping kids to empathize with others, control impulsive behavior, and solve interpersonal problems.

Joan Duffell, the Committee for Children’s executive director, says Second Step is more than a conflict resolution program because it doesn’t just launch into problem-solving and communication techniques. Instead, it begins by helping children understand their own emotions and the emotions of others.

“First, people have to care,” says Duffell. “We think of empathy and compassion as virtues, but actually they’re skills. Teaching empathy is the core not only of this program but also of all human interaction. Without empathy, we can’t solve our problems.”

Jennifer Hegerty’s Second Step supply box is filled with posters, puppets, and black-and-white pictures of kids struggling with real-life situations, such as being teased, being pressured to break rules, or being left out of games. In one picture, a boy named Bob jumps out from behind a tree to scare his friend, Alice. In another, a boy has to stand up to his friends who want his help to spray paint another kid’s garage.

Hegerty will “second step” the scenarios with the kids, asking them to imagine how they would feel if they were the different children in the pictures: How did Alice feel when Bob scared her? What did the boy say to stop his friends from vandalizing the garage? How should Alice respond? How should the boy respond?

Second Step gives kids anger management tools to take into high-emotion situations like these. Hegerty spends a lot of time teaching kids three steps—Stop! Calm Down! Think!—that can help them compose themselves before they react to an emotional situation.

“I teach the kids songs to help them remember the steps,” she says, adding that kids will remind each other of “calm-down songs” when they’re relevant to something going on in class.

Older students get more complicated lessons in empathy and altruism. They are presented with a series of hypothetical situations in which they can choose to help others or just look after themselves.

The purpose of these problem-solving situations is to alert kids to the long-term and short-term consequences of their actions and help them look for ways to get ahead without putting other people behind. “You could really go for broke in those negotiations, but the ultimate cost might be the relationships,” says Karin Frey, an educational psychology researcher and associate professor at the University of Washington, who has studied the Second Step program and helped implement it in schools.

For example, in one lesson kids need to figure out a way to earn money for an end-of-year school celebration. The students are broken up into teams and asked to problem-solve together. They can choose either to get more money for their team but less for the school, or to find a way to distribute the money more fairly. In a study of more than 1,200 students, Frey asked students about their motivations in these types of Second Step scenarios. She found that the Second Step participants would endorse more egalitarian or inclusive goals than their peers.

“Moral actions don’t mean you suppress your self-interest,” says Frey. “It’s a real shift in perspective. If I just press to win at all costs, I’m not going to have as many friends and that’ll make me sad. For some kids, it’s a realization of what the consequences are in the long run.”

Among Second Step participants, that shift in perspective translates into far fewer violent incidents. Frey’s studies show that the schools that implement Second Step programs not only see a marked decrease in aggressive behavior; they also see an increase in kind, helpful behavior.

The program works efficiently by enlisting teachers as Second Step trainers rather than relying on outside instructors. Several of the elementary schools in Worthington have fully implemented the program, training members of the faculty so they can take the curriculum into their own classrooms.

According to Frey, the program has also had unexpected benefits for the teachers themselves. She’s been impressed to see flustered teachers regain their cool by using Second Step tools.
“It’s great when teachers can practice things with the kids,” she says. “There’s a big impact when kids see a teacher grappling with anger and using a calming down strategy.”

Although the No Child Left Behind Act does provide funding for conflict resolution programs, the pressure to keep kids on academic task means there’s little time for extracurricular activities like these. Duffell says that schools that cut back on programs like Second Step are missing the boat. “Kids who are socially and emotionally competent do better in school. They score better on tests,” she says.

A substantial body of research supports Duffell’s claim. For instance, in a 2007 study of 142 elementary school students, University of Delaware researchers Carroll E. Izard and Christopher J. Trentacosta found that students who seemed adept at managing their emotions were also the ones teachers rated as more academically competent. The Committee for Children takes pains to tie the Second Step curriculum’s goals to academic objectives: It publishes a chart identifying the ways each Second Step unit can support skills in math, science, health, and language arts.

Back in Nichole Hosty’s class, the kids are running through the three simple steps to controlling impulsive behavior, from pushing a friend to shouting at a sibling.

“Stop!” says Jennifer Hegerty, putting her hand out like a police officer holding up traffic. The kids follow suit. “Say ‘Calm down’; take a deep breath; count out loud, 1–2–3–4. Think a calm thought, like riding your bike or getting a hug from your parents.”

The class is winding down and Mrs. Hegerty leans forward.

And the kids do, stretching their arms up and behind their heads to pat themselves awkwardly on the back. Then they giggle and grin and fidget, poking each other, ready to move back to their desks and face the next challenge, big or small, that comes their way.

“Thank you for sharing. Great job today!” - the exact words of my wife she told me after I read this article.
But the job is not finished for me. No I need to find how to make your mac faster.
She told if I fail to figure it out - she won’t prepare a dinner today

Excellent article!!  Thanks for sharing it.