What would motivate someone to donate a kidney to someone they have never met?

Research has struggled to come up with a satisfying answer, but a recent study conducted by researchers at Georgetown University took an innovative approach to that question—and its results suggest that feelings of happiness and well-being may play a crucial role in motivating such extreme acts of altruism. 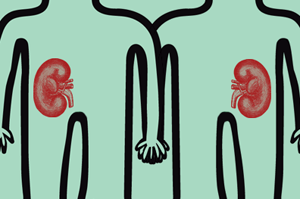 In the study, published in the journal Psychological Science, researchers looked at data on kidney donation from all 50 states, cross-referencing it with data on each state’s levels of “well-being,” which refers to people’s levels of life satisfaction, emotional health, physical health, healthy behavior (e.g., exercise, good diet), job satisfaction, and ability to meet their basic needs like food and safety.

Prior research exploring the factors behind kidney donation has been hampered by the fact that it’s very rare, with less than one in 10,000 people making this extraordinary altruistic choice. However, by analyzing statewide data, the researchers hoped to find large-scale trends that might not be apparent from looking at individual cases.

Their efforts paid off. Results showed that states with high levels of well-being tended to have higher rates of “altruistic” kidney donation—kidney donation to a stranger.

Indeed, the researchers found that even when controlling for key factors such as education, race, age, income, and religiosity, a state’s level of well-being still significantly predicted rates of altruistic kidney donation. Furthermore, analyses combining states into larger geographical regions confirmed that as well-being increases, so do rates of kidney donation to strangers.

The authors point out that an event that happens so rarely probably cannot account for large-scale well-being.

So while prior research has suggested that performing altruistic acts fosters feelings of happiness, this study adds a new twist: Feelings of happiness might actually spur extraordinary acts of altruism. As a result, the researchers suggest that governments should consider adopting policies explicitly geared toward fostering social and emotional well-being.

“Policies that promote well-being may help to generate a virtuous circle, whereby increases in well-being promote altruism that, in turn, increases well-being,” they write. “Such a cycle holds the promise of creating a ‘sustainable happiness’ with broad benefits for altruists, their beneficiaries, and society at large.”