This week, we’re pleased to bring you the first installment of a Greater Good blog from Rick Hanson, neuropsychologist and best-selling author of Buddha’s Brain. Dr. Hanson’s blog will feature posts from his terrific Just One Thing (JOT) newsletter, which each week offers a simple practice designed to bring you more joy, more fulfilling relationships, and more peace of mind and heart.

Like many people, I’ve been very moved by and concerned about the recent earthquake in Japan and its consequences. And I’ve been worried about people worldwide—in Libya, Bahrain, and elsewhere—who suffer under authoritarian rulers of various kinds. This has led me to reflect some on how fragile so many things really are, under the veneer of control that we like to believe we have (especially in Western nations) but actually lack.

Thus the subject of this JOT: Embrace fragility.

The truth of any thing is like a mosaic with many tiles, many parts. 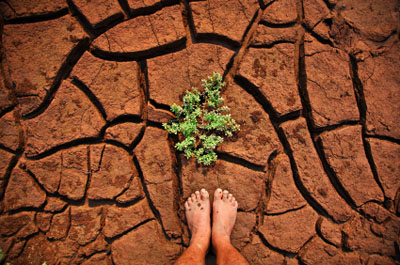 One part of the truth of things is that they are robust and enduring, whether it’s El Capitan in Yosemite Park or the love of a child for her mother and father.

Another part of the truth is that things bruise, tear, erode, disperse, or end—fundamentally, they’re fragile. Speaking of El Capitan, I knew of someone climbing it who had just placed anchors above a long horizontal crack when the sheet of granite he was standing on broke off to fall like a thousand-ton pancake to the valley floor below (he lived, clutching his anchors). Love and other feelings often change in a family. Bodies get ill, age, and die. Milk spills, glasses break, people mistreat you, good feelings fade. One’s sense of calm or worth is easily disturbed. Wars start and then end badly. Planets heat up and hurricanes flood cities. Earthquakes cause tidal waves and damage nuclear reactors.

A life is like a house of cards, and a single gust—a layoff at work, an injury, a misjudgment, a bit of bad luck—can knock it over. Taking a longer view, several billion years from now, our Sun will swell into a red giant star that consumes Mercury, Venus, and Earth: The Grand Canyon, Pacific Ocean, and all the works of humankind will come to an end, utterly fragile.

Sometimes we overestimate the fragility of things, as when we don’t recognize the deep wells of inner strength in ourselves and others. But I think we are more likely to deny or downplay the true extent of fragility: It’s scary to realize how delicate and vulnerable your body is, or the threads that bind you to others—so easily frayed by a single word—or the balance of climate and ecology on our planet. It’s scary and humbling—neither of which people like—to face the underlying frailty of the body, how easy it is for a relationship to go awry, the ways that so many of us are over-extended and running on fumes, the rickety underpinnings of the global financial system, the deep fissures within many nations, or the unpredictability and intensity of Mother Nature.

But if we don’t recognize fragility, we’ll miss chances to protect and nurture so many things that matter, and we’ll be needlessly surprised and upset when things do inevitably fall apart. We need to embrace fragility—to see it clearly and take it into our arms—to be grounded in truth, peaceful amidst life’s changes and endings, and resourceful in our stewardship of the things we care about.

Simply be mindful of fragility—both actual and potential. Notice how many things do break (defined broadly), and notice how many more there are that could break and eventually will: “things” such as physical objects, relationships, projects, agreements, states of mind, lives, and societies.

Notice any discomfort with recognizing fragility. Be aware of the other tiles in the mosaic—such as stability, resilience, and repair—that can help you push through this discomfort. Appreciate that it is the fragility of things that often makes them most precious.

See the fragility of others, and their pains and losses related to all the things that have “broken” or could break for them. See the delicacy of their feelings, the sensitivities and vulnerabilities in their sense of worth or well-being. Let this knowing about others—both people you’re close to and those you’re not, even people who are difficult for you—open your heart to them. Knowing the fragility of others will naturally lead you away from being harsh or unkind to them.

See the brevity and flimsiness of your own life, and the fragility of your hopes and dreams: Why wait another day to do all that you reasonably can to fulfill them?

Consider where you are unnecessarily fragile—perhaps too prickly about criticism, too vulnerable to a slumping mood, too prone to illness, too indebted, too isolated at work (or in life altogether), or too under-resourced in any significant area—and make a realistic plan for shoring these up. For example, I’ve been getting run-down and have realized I really need to make sleep a higher priority.

Do what’s in your heart about what’s fragile in our world—whether it’s an ailing elderly person next door or disaster victims across an ocean.

Ultimately, try to come to peace with the inevitable: all things fall apart, one way or another. Everything cracks. And yet there is something so beautiful about this part of the truth, as Leonard Cohen says (in his song “Anthem”) much more eloquently than I can:

Thank you for your insightful writing. I was so excited
to see your name in the newsletter as I recently read
“The Buddha’s Brain” while part of a yoga class. I
absolutely loved your book and have referred many
friends to it. Thank you for all you’ve taught us about
ourselves and others!

This is wonderful, thank you.

Do you think there is a relationship between our perceptions of fragility and our aesthetic sensibilities? That which is fragile or delicate seems so often to be more touching than that which is robust or strong, and seems to stir such a different response. Do these contrasting qualities appeal to different elements of our senses or emotions? And where has this come from?

I agree with a lot of things you said about how fragile things appear to be in this world. I feel that the world of “form” is only meant to be temporary, yet sometimes we get so caught up in so called “reality” that we forget that underneath all form science has proven we have a common denominator; which is everything is some type of energy.

I also strongly believe in the law of cause and effect.  I believe that the actions of many will cause a reaction back to a somewhat type of equilibrium.  Meaning I believe we need to start becoming more conscious on how we treat the planet and everything else that inhabits it or consequences will have to be faced.

I really enjoyed reading your article.  Keep up the great thinking and writing. 😊

we have many earthquakes within ourselves. But still we continue to gather the ruins all over again every time

Thanks for insightful article. Yes, important to
realize we live in world of duality
and accept its underlying “fragility” (i.e., temporal).
But rather than somehow seek strength from that
practice, how much more enriching to recognize and
strive for the potential of the enduring conciousness
that Buddha attained and all yogis seek. Why
concentrate on cracks and letting light through when
the light beyond the cracks is there to be had?

I was pleased to see you address the topic of fragility. Frankly, I think it is far too overlooked, and that is sad when acknowledging it in ourselves and others can help us become more empathetic and tolerant. I recently wrote and taped on my front window:
HUMAN BEINGS ARE FRAGILE AND FLAWED.  STRIVE TO FORGIVE THEM, AND YOURSELF, WHEN YOU CAN, EVEN WHEN THEY CAN’T. BEHIND OUR FLAWS IS GREAT BEAUTY—THE DIVINE.
If we acknowledge our inherent fragility, we will be more likely to forgive others, but in our society it seems to be considered a weakness to express our fragility. So when we and others mess up, criticism seems to be all too easy. One of my favorite quotes (I am not sure if this is correct word for word) by Marianne Williamson is “The places in our personalties where we tend to deviate from love are not our faults but our wounds.” Thanks!