Emotional intelligence (EQ) is a key predictor of mental health. Our EQ refers to our ability to be aware of, regulate, and express our emotions and to understand, and respond skillfully, to the emotions of others. Regulating emotions, especially big, difficult emotions, takes care and practice. EQ is not something that everyone naturally has, but it can be learned and nourished with research-backed strategies, many of which include an element of mindfulness. 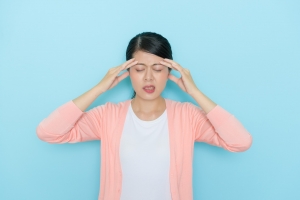 But a word of caution: Not all emotional regulation strategies are created equal.

Emotion suppression, for example, consists of “inhibiting the outward signs of your inner feelings.” Professionals in high-stress jobs (doctors, police, military) are often taught that emotional suppression is an effective strategy for emotional regulation, in spite of plentiful research suggesting otherwise. Studies have shown that suppressing emotions actually endangers your health and well-being, both physically and psychologically. Emotional suppression (having a stiff upper lip or “sucking it up”) might decrease outward expressions of emotion but not the inner emotional experience. In other words, suppression doesn’t make the emotion go away, it just stays inside you causing more pain.

How to regulate, not suppress, your emotions

When it comes to regulating difficult emotions, there are two ways most people respond: They act out or they suppress. If you act out with a strong emotion like anger, you will most likely create undesirable consequences in your relationships, your work, and even your play. The ripple effects of acting out usually provoke more anger around you, which leads to more difficulty. The consequences of suppressing those big emotions can be even more dangerous.

What many people aren’t aware of is that there’s another way to regulate our emotions: Feel the feeling in real time.

On one level, emotions are like energy waves, varying in shape and intensity, just like ocean waves. Their nature is to arise and pass away pretty quickly, like all natural phenomena. If you attempt to interrupt this process, through acting out or suppressing, several things can happen.

Tragically (and ironically), efforts to “talk yourself out of your emotions” often result in “increased rumination and perseveration.” In other words, you will keep thinking about and holding onto those emotions you’re trying to avoid. Anyone who’s had a deep-tissue massage has empirical evidence for how the body holds suppressed feelings. Suppression gets held in the body and creates a host of downstream effects, including anxiety, depression, stress-related illness, all the way to substance abuse and suicide.

How mindfulness helps you feel your emotions in real time

Research into emotional regulation suggests that mindfulness-based interventions (MBIs) can be helpful. I have had the privilege of teaching adaptations of a program called Mindfulness-Based Emotional Balance (MBEB) to physicians, police officers and elite military (Joint Special Operations Command). In each setting, these highly trained professionals are explicitly instructed to either suppress, deny, or compartmentalize their challenging emotions in order to function effectively in high-stress jobs—jobs that involve significant exposure to the kinds of suffering likely to trigger strong emotions. In fact, participants often reported with pride their ability to completely “turn off” their feelings either at work or at home.

At the same time, these professions report some of the highest incidences of both suicide and substance abuse. Although correlation doesn’t imply causation, it is interesting to note that these specific populations, whose jobs involve acute exposure to difficult emotions, and who have been generally taught to deal with emotions by suppressing them, demonstrate such high degrees of clinical distress.

We encountered boatloads of skepticism and resistance when we suggested to these highly trained, high-stress professionals that they “just feel their emotions in real time.” There was no way to convince them, other than to invite them to test it out in the “laboratory” of their own lives. Anecdotally, reports from Green Berets, veteran police detectives, and neurosurgeons included better sleep, increased job satisfaction, closer connections to colleagues, reduced headaches, and, most surprisingly to them, improved job performance.

MBEB combines the tried-and-true methods for training in mindfulness from the Mindfulness-Based Stress Reduction (MBSR) program with a particular focus on emotions, bringing in the latest emotion theory as well as heart practices that aren’t typically a part of MBSR (forgiveness, compassion, kindness). Challenging emotions like anger and fear are explored both cognitively and viscerally, creating increased tolerance for—and reduced interference with—the normal flow of these constantly changing phenomena.

This article was originally published on Mindful.org, a nonprofit dedicated to inspiring, guiding, and connecting anyone who wants to explore mindfulness. View the original article.