Parents ask kids to do pretty boring things all the time. Just this morning, I asked my preschooler to help put pairs of socks together, clean up toys, and brush his teeth. I’m sure he immediately thought of at least three fun things that he’d rather be doing, like ride his scooter, have a dance party, or watch a movie. And the tedious demands will only become more frequent as he gets older. 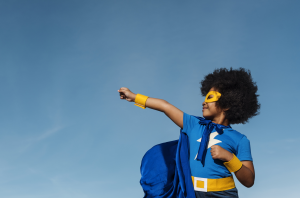 Perseverance is a skill that we expect kids (and adults) to learn, a critical part of being someone whom others can count on—a reliable family member, friend, neighbor, employee, or leader. Students who are more able to resist temptations and practice self-discipline have better school achievement, well-being, and emotional health. And perseverance is one of the influences that women cite as critical to their professional success.

What helps kids stick with it when they have something dull or tough to do, rather than quit and do something irresistibly entertaining? In a recent study, psychologist Rachel White and her colleagues explored this question.

The study participants were 180 four and six year olds. The researchers asked the children to work hard on a boring, 10-minute computer activity that involved pressing the space bar when they saw cheese and not pressing it when they saw a cat. The kids were also told that they could take a break to play a fun game when they wanted to on an iPad left beside them.

The researchers randomly assigned kids to three different groups. In one group, the researchers told the kids to focus on their own thoughts and feelings and to ask themselves, “Am I working hard?” Meanwhile, children in the other two groups used a tactic called self-distancing—“taking an outsider’s view of one’s own situation”—which has been shown to boost resilience.

Children in the second group were told to ask themselves the same question using their own name: “Is [name] working hard?” And the researchers told the children in the final group to choose a character who is really good at working hard—either Batman, Bob the Builder, Rapunzel from Tangled, or Dora the Explorer. The researchers also gave the children the character’s prop, such as Batman’s cape, and told them to ask themselves, “Is [character’s name] working hard?”

During the 10-minute activity, a pre-recorded message played on the computer every minute based on the child’s group. For example, kids in the character group heard messages like, “Is Bob the Builder working hard?” The researchers measured children’s perseverance as the time they spent working on the boring task.

White and her colleagues explain, “Taking on the perspective of another person could have provided the greatest separation from children’s own experience, allowing them to disengage from immediate temptations or negative emotions and focus on their goals.”

They also suggest that kids might have persevered more because they were able to strongly identify with the characters’ competence and strengths, particularly with the help of props, or because pretending to be a heroic character was actually fun.

What do these findings mean for parents who want to raise reliable kids who stick with it? Dress up and pretend play superheroes, of course!

Practice teaching your kids self-distancing by asking them which story characters work hard to get something done even when it’s tough. During home chores or schoolwork, encourage your kids to pretend to be their favorite superheroes while wearing their props and ask them (as that character) how hard they’re working. You can even create special props using everyday household items, like tablecloths for capes and toilet paper tubes for superhero cuffs. Alternatively, get extra mileage throughout the year out of Halloween costumes.

Although kids will eventually grow out of their superhero costumes, self-distancing can continue to benefit them beyond childhood. Researchers Ethan Kross and Ozlem Ayduk explain that self-distancing self-talk—privately talking to yourself without using “I” or “me”—helps adolescents and adults better handle how they think, feel, and behave under stress. Calling themselves “you” or their own name, they might say things like, “Why do you feel this way?” or “What could Jane do to make things better?” As our kids get older, we can teach them to practice this to gain some distance from their challenges.

For now, though, when my preschooler finds it tough to tie his shoes or learn how to ride a bike without training wheels, I’ll remind him of the superpowers he has to support him along the way.