Sometimes I scratch my head when I read about the government’s efforts to improve schools: new standards and tests that have to be implemented immediately, punitive teacher evaluations, and threats of school closures and job losses. All methods that I’m sure have the school employees’ amygdalae firing off 24/7, not to mention the students’. 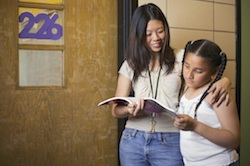 Instead of incapacitating people’s ability to problem-solve or try new ideas—which is what fear does to us—research on school reform strongly suggests that policy-makers should be encouraging school leaders to take a more humane approach. In their seminal 2002 study on the reform efforts of twelve Chicago public schools, authors Anthony Bryk and Barbara Schneider found that enabling positive social relationships between the adults was the key to successful school improvement—and that trust was at the heart of those relationships.

Trust in schools comes down to one thing: psychological safety. By this I mean safety to speak one’s mind, to discuss with openness and honesty what is and isn’t working, to make collective decisions, to take risks, to fail—all things researchers tell us are required for deep organizational change and transformation.

Yet this kind of safety doesn’t come easily to schools. According to Bryk and Schneider, the adults in a school community rely on each other to do their jobs correctly and with integrity. The challenge is our expectations for one other are very diverse, based on our unique backgrounds, including our previous school and work experiences.

At one school where I taught, each teacher had differing expectations about how much extra effort teachers should put into their work—a huge bone of contention between the teachers who left after the last bell and those who worked into the evening. And when expectations are largely unconscious or unspoken, it becomes impossible for others to live up to them.

We also make assumptions about the intentions behind a person’s behavior, and, as we all know, assumptions are often wrong. For example, parents and teachers may think the principal made a particular decision based on his or her career advancement rather than what’s best for the students. If we don’t feel psychologically safe to question our assumptions and expectations with each other, trust flies out the window and our relationships suffer.

I’m actually not surprised that education policy has yet to embrace the idea of building trust in school environments. For one thing, it’s hard to measure and hard to implement. It also requires us to take an honest look at ourselves, both personally and professionally, and potentially surface those parts that are painful or tender to the touch. And trust-building is just not part of a school leader’s training.

Fortunately, a new program piloted by the Center for Courage & Renewal called Leading Together: Building Adult Community in Schools has been found to be effective in cultivating trust in school communities. In a nutshell, the program helps principals and their staff members create a safe space to do the necessary inner work for building trust and community.

Developers of the program, Pamela Seigle and Chip Wood (creators of the social-emotional learning programs Open Circle and co-creator of Responsive Classroom, respectively) and Lisa Sankowski were inspired to develop Leading Together based on their previous work with principals. “We saw time and again that principals were experiencing a tremendous sense of isolation, despair, and overwhelm,” explained Seigle, “The role of the principal is not structured in a viable way – they can’t build school community alone.”

Using the principles and practices of the Circle of Trust approach developed by Parker J. Palmer and the Center for Courage & Renewal, along with methods such as active listening, discussion protocols, reflection, song, mindfulness, and poetry, school teams made up of the principal and teacher-leaders spend four days during the summer and two more days during the school year with the Leading Together facilitators and each other envisioning how they will foster trust amongst the adults in their schools.

“After four days with Chip and Pamela, you feel like you can take on the world,” said elementary principal Paul Carolan, “but it’s not about that. It’s about getting a truer sense of who you are by making the space to be more vulnerable—and to do some great learning.”

With the on-going support of the program’s facilitators, the teams return to their schools and begin the challenging work of implementing their ideas. Ed Kaufman, an elementary principal, described the resistance he met from some of his staff members. “Teachers would say to me, ‘we have so many educational things to talk about. Why are we doing activities to build trust?’ It takes time to help people realize that working on our relationships with each other will make the rest of what we do so much more effective and efficient.”

Finally, after several months of doing this work, Kaufman saw that things were starting to shift. “At a staff meeting, we were using one of the Leading Together protocols called ‘Connections’ where people volunteer to share something professional or personal with the rest of the group,” he described, “Normally three or so people participate. This time we had twenty-five people who wanted to share something. I realized that this was a turning point.”

The rewards of building trust

Even though trust-building may seem like an uphill battle, in the end it pays off. For one thing, it lowers teachers’ stress levels. “In the past, I’ve had some very difficult challenges with teachers when they started feeling overwhelmed,” said Carolan. “The angst is still there, but it’s tempered because we’re using the Leading Together protocols to figure it out together.”

Carolan also found that educators participated more in decision-making because they felt their voices were now being heard. “I had so many teachers volunteering to help with our school development plan that I had to pick and choose who would be there,” he said.

Kaufman discovered that he was better able to help teachers develop professionally. “As an administrator, when teachers don’t know or respect you and you push them hard,” he explained, “it can make the relationship less cooperative and congenial. Our work with Leading Together has permitted me to get to know teachers better and have deeper conversations in ways not meant to be negative, but to challenge them to grow and learn.”

Middle school principal Patricia Montimurro felt that the Leading Together practices added years to her life. “I’ve found an inner peace that wasn’t there before,” she said. “When I opened up to slowing down and being present, it made me feel more confident about my work and less concerned about the ‘what ifs’. My staff also saw me become calmer, which helped them be calmer, too.”

In the end, the ultimate beneficiaries are the students. Kaufman found that as his teachers collaborated more with each other, they became more invigorated by their work, which led to more engaging and thought-provoking curriculum for the students. “They also connect better with their students,” he observed, “and they’re more sensitive to their students’ relational issues.”

Ultimately, principals have to realize that building trust doesn’t happen overnight. “This is hard stuff,” said Seigle. “Being in relationship with each other is harder than rocket science. And it’s something that you always have to be working on.”

But, according to Montimurro, the heart of education is trust. “The field of education needs this as much as it needs test results, standards, and teacher evaluations,” she explained. “If we’re going to keep good people in education, we need this work because it’s so stressful.”