It’s clear by now that our tendency to divide the world into decent, trustworthy people like ourselves and dangerous outsiders begins quite early in life. But how exactly do young children decide a potential playmate is a member in good standing of his or her social group?

Newly published research identifies a surprising marker: Whether the new acquaintance is familiar with the child’s favorite songs. 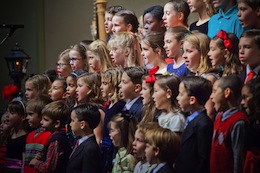 It seems music doesn’t necessarily bring people together; it can also drive them apart.

Given that the fundamental distinction between “us” and “them” is at the heart of most conflicts, tracing its origins is an important line of research, and Soley and Spelke’s work points to a basic psychological drive. Instinctually, we all desire to be part of a group, and “shared knowledge of cultural traditions” can be “a particularly potent cue to group membership,” the researchers write.

To investigate specifically how this works, they performed a series of experiments with children around the age of five. In one, 24 children from the Boston area viewed pairs of photographs of other five year olds on a computer screen.

“As each photograph was shown, the experimenter played a song that was described as the child’s favorite song,” the researchers write. Half of these melodies were familiar Western children’s songs such as “Mary Had a Little Lamb” and “Row Row Row Your Boat,” while the others were “Balkan folk songs with unfamiliar melodies.” After seeing the photos and hearing the songs, the child was asked “Which one of these children would you like to be friends with?”

“Participants tended to choose as a friend the target children whose favorite songs were familiar songs in the style of Western music,” the researchers report.

Subsequent experiments found this familiarity-leads-to-friendship effect held true even when the unfamiliar songs were in a Western style. This makes some sense from an evolutionary perspective, given that musical styles often are shared between many groups living over a wide area.

“These smaller social groups constantly formulate their own culture-specific knowledge in order to define themselves, and establish and preserve their boundaries,” Soley and Spelke write. “This tendency can lead to a corpus of specific songs,” knowledge of which is a signal of group membership.

Another fascinating finding: Whether the child liked the particular song was not relevant; simply being aware of it was what identified one as a friend.

This appears to be an early example (developmentally speaking) of “the power of culture as a unifying force in human societies,” the researchers conclude. Of course, the flip side of that is it’s also a divisive force in that it helps kids to identify and reject certain peers as outsiders: If you don’t know “The Farmer in the Dell,” you’re no friend of mine.

So perhaps the many international versions of Sesame Street may not want to get too culturally specific. If we could teach the world’s children to sing at least some of the same songs—well, who knows? Perhaps we could subvert, or at least postpone, our ingrained tendency to divide the world into us and them.