Is it possible to forgive infidelity and to overcome the emotional pain of betrayal? 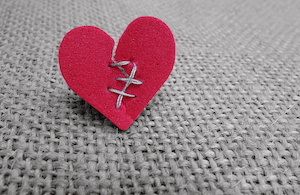 It is, suggests a new study published in the journal Mindfulness—if you can feel some compassion for yourself.

The study—the first to examine the relationship between mindfulness and forgiveness of infidelity—surveyed 94 adults who had been cheated on by a partner. They reported on their levels of forgiveness, which involves feeling in control of their emotions, having a balanced view of the relationship (rather than vilifying their partner as wholly evil), and being ready to let go of anger and put the affair behind them. They also reported on their levels of unforgiveness—a separate measure that involves withdrawing from their partner, experiencing emotional upheaval, and desiring revenge.

By this definition, forgiveness is something we do for ourselves, to reduce our suffering; it doesn’t mean we condone the affair or even reconcile with the offender. In fact, over half of the participants in the study were no longer in a relationship with the cheating partner.

Ultimately, the study’s findings suggest that people who are more mindful tend to be more forgiving and less unforgiving—for certain aspects of mindfulness. In this study, mindfulness was broken down into five separate abilities:

Partners who had a greater ability to act with awareness—to be deliberate and thoughtful—were less likely to be stuck in a state of resentment. It was also important to withhold immediate reactions and to be nonjudgmental of yourself. In these ways, mindful victims of infidelity seemed to avoid getting consumed by negative emotions.

These results held even when controlling for factors that are known to influence forgiveness, including how severe the betrayal was, whether the partner was remorseful, and whether the victim was prone to empathy or anger.

So if mindfulness goes along with forgiveness, what might be the mechanism behind this link?

“Individuals higher in [self-compassion skills] may be willing to accept the turmoil and discomfort they are feeling without overidentification with these states and feel compassion for themselves going through this experience,” the researchers explain.

So how might we cultivate mindfulness when faced with infidelity? Here are several tips to keep in mind when attempting to forgive:

(These tips are adapted from two longer forgiveness practice, Nine Steps to Forgiveness and Eight Essentials When Forgiving.)

Ultimately, this study unearths some of the complexities surrounding how we view and manage our negative emotions. If mindfulness truly can help us cope with the great emotional pain of infidelity, it must be a powerful skill, indeed.