In best-selling books like Emotional Intelligence and Social Intelligence, Daniel Goleman has laid out the cognitive science and theories behind our emotions and social interactions. In her work as a psychotherapist and in her best-selling book Emotional Alchemy, Bennett-Goleman has applied those theories to overcoming self-defeating habits of mind and improving our relationships. 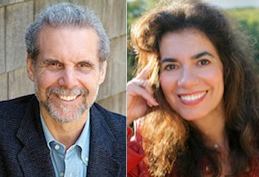 Now Bennett-Goleman has a new book called Mind Whispering: A New Map to Freedom from Self-Defeating Emotional Habits. In it, she builds on the theory described in Emotional Alchemy to apply mindfulness to overcoming the ingrained emotional habits that can hurt our relationships.

I spoke with Bennett-Goleman and Goleman recently, just after a workshop they had conducted at the Spirit Rock Meditation Center, in Woodacre, California on “mind whispering.”

Tara Bennett-Goleman: Mind whispering is an integration of Eastern and Western psychologies, the neuroscience of habit change, and principles from horse whispering, creating a new map of the emotional mind. It draws on mindfulness, cognitive therapy, and Buddhist psychology to re-pattern self-defeating habits. In Mind Whispering, I describe a spectrum of modes of being—habitual ways we think, feel, act, and interact—that range from the self-defeating to the positive range where we are at our everyday best and beyond, to a mode of equanimity, wisdom, and compassion.

Daniel Goleman: Mind whispering helps us to identify our modes of being, particularly the ones that are built around self-defeating habits. Unfortunately, many of us get stuck in those. Tara’s book names half a dozen modes of being: One is taken from the horse-whispering model (the predator-like/prey-like mode), another from developmental psychology and attachment theory (the anxious/avoidant mode), and another from Buddhism (being attached to things you like or averse to what you don’t), for example.

The modes are on a spectrum—there’s a self-defeating range, but then there’s a positive, healthy range. The alternative to being either anxious or avoidant is to be secure, and the research shows that if we’re in the secure base we’re more open, empathic, generous, and compassionate. The secure mode helps us connect with others.

JS: Why horse whispering? What can horses tell us about changing negative thinking patterns and making better connections?

TBG: When I was working on developing this new model of mind for mind whispering, at the same time I was working with the horse whisperer Bob Sadowski, who was giving me lessons with my horse. As I was writing about how emotions can either connect us or disconnect us, I was learning the same thing in the field with horse whispering. 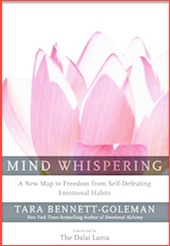 Horse whispering shows you how different it is to behave and communicate from a place of connection rather than disconnection, and how many assumptions we make about how another being is experiencing the world.

In human relationships, we need to be aware of how different we all are and to make an effort to understand and empathize with how others see things and to not get so reactive. If we do this internal work with our own modes we are less likely to see the world through these lenses of conditioning.

JS: But when people are in mindsets or modes that are self-defeating, they don’t always seem to see their own distorted thinking.

DG: That has to do with the neuroscience of habit formation. Some of these habits may have served as coping mechanisms for difficult situations earlier in life. As we develop a habit, the brain switches from active learning—which is based in the pre-frontal area—to habitual responding—which is based in the basal ganglia, outside our conscious awareness. These habits will enact automatically when the right trigger or cue comes along, without our being aware. One of the key things that Tara has done is to develop mindful habit change, where mindfulness develops an attuned and discerning awareness that recognizes these habits that are normally hard to see.

TBG: It’s also poignant to hear stories from people like Paula Green, who does work with conflict resolution. She goes to war zones and parts of the world where there’s conflict and people won’t talk to each other. But they trust her. So she will get together with these groups of people and listen to their stories, their hardship, their hostility toward one another.  She will get both sides sitting in the same room with her and sometimes she will hear them wonder, “How did we get here?”

These emotional habits have a life of their own—they’re like invisible puppeteers of the mind. That’s why it’s really important not only to be aware of and acknowledge these patterns in our minds, but to change them before they become the drivers of choice.

JS: What do you think cognitive science has to tell us about how negative habits of mind are changed?

DG: This is why Tara has mixed mindfulness with Eastern and Western psychology. As Tara says, Automatic thoughts distort reality. Cognitive therapy and mindfulness train your mind to perceive things more accurately, leading to wiser choices.

TBG: It also takes compassion for yourself and others. In traditional horse training—or what’s called “breaking a horse”—force and control are used, which might get a horse to do what you want, but it can harm the connection. In horse whispering, you collaborate with the horse and gently guide it through the learning process.  We need to learn how to re-pattern these habits in a gentler way.

JS: A lot of people these days want quick fixes to their emotional problems. How do you inspire people to put in the work to change their negative mindsets?

TBG: Well, first, I don’t feel I can change anyone unless they are willing and wanting to change themselves. It really has to come from the inside.

But it’s not a quick fix. It takes a lot of deep work. A person might need support, or they can do that work by themselves. It does help to have a map to guide you. And it helps to have good friends or people that really are caring. It’s important that the work not only happen on a cognitive or behavioral level, but that the heart is really cared for. Because when we start to change these habits, it starts to redefine our sense of ourselves, our world, and our relationships.

DG: If you tend to be, for example, in the aversive mode, you’re the kind of person who always vetoes everything, who always sees the negative and never the positive. If you’re a leader at work and you’re the kind of boss who always gives F’s and never gives A’s, and you’re very critical, it’s very demoralizing. And that’s an emotional habit or mode that is not only self-defeating, but it alienates the people around you and it harms the goal of the whole organization.

JS: If you could direct psychological science over the next ten to twenty years, what questions would you like to see answered?

TBG: I think that the practice of inquiry and investigation—mindful investigation—could really help scientists come more from their own personal experience when they’re doing their research. When people used to do that many years ago, neuroscientist Richard Davidson tells me, it was called wise science.