You drop a glass while making breakfast. You get stuck in traffic on your way to work. Your boss yells at you for being late. Congratulations! You’re having a bad morning. It happens to everyone, at one time or another. But how we react to the bad things in life reveals a lot about our brains. 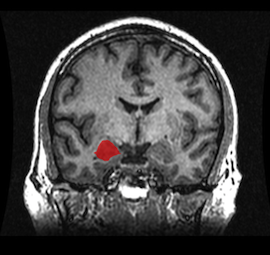 It might seem to go without saying, but people with sunnier dispositions are better able to regulate their emotions than people with gloomier personalities, who are more likely to be thrown by unpleasant events. Why is this?

Why does this question matter? Because of its implications for the way you view your life. Is it better to ignore the negatives and setbacks altogether, or to strengthen your ability to zero in on the good without glossing over the bad?

One way to test these hypotheses is to look at activity in the amygdala—a small, almond-shaped brain region—in people with different emotional styles. For years, neuroscientists have thought of it as the primitive “fear center” of the brain, always on the lookout for potential threats. In some people, increased amygdala activity has been linked to depression and anxiety. However, less is known about how the amygdala responds to positive stimuli—and how this activity might relate to feeling positive emotions.

That’s what psychologists William Cunningham at the University of Toronto and Alexander Todorov of Princeton University are exploring with their colleagues. In a series of recent studies funded by the John Templeton Foundation (which also supports the work of the Greater Good Science Center), they’ve discovered a whole new amygdala—one that’s implicated in human connection, compassion, and happiness. According to their research to date, the happiest people don’t ignore threats. They just might be better at seeing the good.

What is the amygdala for? 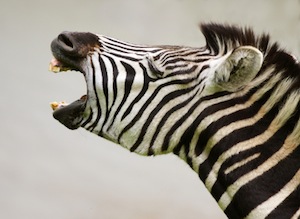 A wild zebra must constantly be on the lookout for lions and other predators, even while it is in the process of pursuing a goal, such as looking for water or a mate. Scientists have traditionally tied this looking-out function to the amygdala. However, recent research suggests that the amygdala is also active when people are trying to meet so-called “appetitive goals,” like our zebra’s interest in drinking, eating, and mating.

Because threatening situations can have lethal consequences, it makes sense that the amygdala would be tuned to react to all fearful stimuli. But does the amygdala respond to all positive stimuli as well? Would our zebra’s amygdala activate every time it sees a watering hole, even though it’s a good thing, not a bad thing?

Cunningham and colleagues took on these questions in a study published last year in the Journal of Cognitive Neuroscience. They displayed a series of side-by-side images to study participants—15 people in total—while recording their amygdala activity using functional magnetic resonance imaging (fMRI). The pictures varied in their emotional content (positive, negative, or neutral) as well as the extremity of the emotion they evoked.

From the fMRI data, Cunningham and colleagues found that negative images did provoke amygdala activity, as expected. The positive images did as well—but only when the participants were explicitly told to focus on them.

Humans have a negativity bias, a tendency to focus on threats. But this research suggests that people may be able to compensate for it by consciously trying to focus more on the positive. As the authors put it in their paper, “while people do automatically attend to negative stimuli, given the proper ability and motivation, they can show the same sensitivity to positive stimuli.”

Another study by a team that included Cunningham and Todorov—to be published this year in the forthcoming book Positive Neuroscience—found that the amygdala “may also be at the heart of compassion.” The researchers scanned participants’ brains as they viewed pictures of people who might be useful in pursuing a goal—or in need of help. The team found that amygdala activity spiked when participants perceived people in need. Not surprisingly, this was especially true for participants who scored high in empathy.

As the authors note, other research has linked the ability to connect with and help others to personal well-being. Taken together, these studies suggest that humans possess a subconscious “compassionate instinct”—an urge to help people that exists even in parts of the brain that are sometimes referred to as “primitive” or “reptilian.” The paper concludes:

This research project builds on the idea that our evolutionarily older brain systems are not solely a source of immorality and selfishness, but when tuned by our goals, can contribute to moral and just behavior. Thus, human flourishing does not come from the suppression of aspects of the self, but rather through the integration of all relevant processes together into a unified response.

Happy people take the good with the bad

But this research raises another question: Does human happiness depend on filtering out the negative things in life? Or in brain science terms: Do we want to avoid the stress of amygdala activation, even when it comes to perceiving people in distress? How do happy people respond to the dropped glass, traffic jams, threats from the boss—or even the sight of homeless people on the street?

That’s the question tackled in another study published in the journal Social Cognitive and Affective Neuroscience, where Cunningham and Ph.D. student Tabitha Kirkland sought to determine whether the amygdalae of happier people respond differently to positive and negative stimuli when compared with less-happy people.

Cunningham and Kirkland recorded the amygdala activity of 42 participants as they viewed series of positive, negative, and neutral pictures. Participants also filled out surveys to determine their subjective happiness levels. Was there anything distinctive about the way happy people’s brains responded to the different types of photos?

Indeed, when compared with less-happy people, the researchers found that happier people had greater amygdala activation in response to positive photographs. But they did not have a decreased response to negative images, as would be predicted by the “rose-colored glasses” view of happiness.

In fact, the researchers found that “amygdala activation among happier participants was equally high for positive and negative stimuli.” According to the paper, this suggests that “happier people are not necessarily naïve or blind to negativity, but rather may respond adaptively to the world, recognizing both good and bad things in life.”

This is a particularly interesting finding because it suggests that being able to sense and respond to negative information may actually be an important component of happiness. The authors’ conclusion from this study: “Happy people are joyful, yet balanced.”

The upshot of this research is that our amygdala can no longer be viewed simply as the brain’s fear center. Instead, it seems that even at a very deep, instinctive level, we are wired to see people in need and help each other out—and that doing so might help us to be happy.