We all experience the ups and downs of life sometimes. We might be treated badly by others or miss out on something we think we deserve, like a promotion at work. This can make us feel wronged, but we tend to get over it—or so you might think. In recent years, researchers have shown that carrying a sense of injustice or unfairness about something, particularly over a prolonged period, can have an adverse effect on our health. In particular, it can make painful conditions worse.

The classic case is where a person incurs a painful injury and blames someone—a car crash victim aggrieved at a reckless driver, for example, or a worker blaming their employer for an accident on the shop floor. 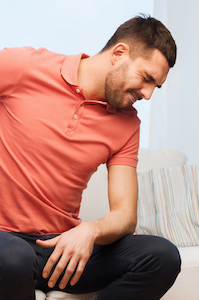 The victim’s sense of injustice needn’t stem from the accident itself, either. It might come from how they are treated afterwards by the likes of health professionals, insurance representatives, or unsupportive family members.

Whether we are talking back damage, arthritis, whiplash, or another source of pain, there are clear associations between perceived injustice and aggravated pain, not to mention disability and emotional distress. It can greatly affect the victim’s life and interfere with their recovery and return to work.

In a new study that I’ve co-authored, we suggest that the injustice doesn’t even need to be linked to the pain itself to affect how the person experiences it. We asked 114 healthy students to put their hand in cold water until it became too painful, like handling a snowball. They had to rate how much pain they had felt during the task and their current level of anxiety.

We then interviewed some of them about something unfair that had happened in their lives, such as unfair rules, poor treatment by family or friends, or increased workload.

After the interviews, all participants had to complete the cold water task for a second time and rate their pain and anxiety again. It turned out that they felt greater pain and became more anxious after they had recalled the injustice.

Belief in a just world

So why this link between perceived injustice and pain? The evidence so far suggests it has something to do with how a sense of injustice affects our thoughts and emotions. It might lead people to ruminate on their suffering, resulting in physical and emotional distress. It can also make people angry, which may trigger a series of bodily responses that can ultimately worsen the pain.

We don’t yet know enough about whether everyone perceives injustice in the same way, and what kinds of people are most likely to be affected. But one thing we do know is relevant is how much the sufferer cares about justice.

Those people most passionate about justice are the ones who need to believe in a world where each person gets what they deserve, good or bad. This makes them the most vulnerable to the undeserved suffering at the core of an injustice. And sure enough, when faced with an injustice, these “strong just-world believers” report more pain and display more of the behavior linked with pain than those with a weaker belief in a just world.

Having said that, when these just-world believers experience pain but are not harboring any grievances, they may actually come out better than other groups. This could be because their belief helps to provide meaning in their world, acting as a buffer against pain and the accompanying distress. I should stress that this point needs more investigation, however, since the findings to date have been inconsistent.

Why do these insights matter? Knowing that perceived injustice affects pain means you can potentially do something about it. Making a difference to sufferers is likely to be challenging, however, not least because perceived injustices arise for so many different reasons.

Much has yet to be learned about how to clinically treat or manage a person’s sense of injustice when they have pain. This helps to explain why there is not yet a systematic method for treating these people. More research into how injustice affects pain will undoubtedly help, particularly in relation to the effect of specific kinds of injustice. The hope is that in years to come, we can use these insights to reduce sufferers’ pain and improve their quality of life in the process.