For many fathers, the coronavirus pandemic tightly wove work with family life. Because remote work and remote school were a fact of life for a lot of families, some fathers have spent much more time with their children this past year compared to previous years.

What impact might that have on the children, down the road? It’s too early to say, especially since research on fathers lags behind that on mothers. But we might find clues in what we do know right now about how dads can influence children’s well-being. 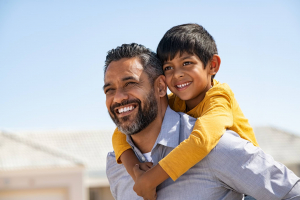 A recent study by Riley Marshall at Southern Illinois University and her colleagues suggests that fathers play a unique role in nurturing their children’s positive self-regard as adults. They studied over 600 adult twin pairs in the United States—approximately half were identical and half were fraternal. The twins were nearly all white (92%) and were between 20 and 73 years old.

Researchers interviewed them by phone about their memories of being parented by both their fathers and mothers, exploring how much each of their parents gave them love and affection, were consistent about the rules, and were generous toward people outside the family.

The researchers also measured the twins’ self-esteem as adults with questions about their self-acceptance, self-confidence, and life satisfaction. For example, the researchers asked how much they agreed with items like, “I like most parts of my personality” and “When I look at the story of my life, I am pleased with how things have turned out so far.”

Because they studied identical twins who share all their genes, the researchers were able to determine whether environmental differences in parenting can play a role in the children’s self-esteem while controlling for genetic factors.

The findings? Both fraternal and identical twins’ memories of their parents’ affection, but not their discipline and generosity, were related to their later self-esteem—but it was the affection of dads that really made the difference. They found that the identical twins in the pairs who felt greater affection from their father tended to have higher self-esteem. Surprisingly, this was not the case with mothers.

“Mothers may be more likely to perform appropriate amounts of caregiving for all children,” explain the researchers. “Even if children experienced, or remember experiencing, different levels of maternal affection, they still may feel that they were cared for appropriately, and, therefore, differences in it may not be expected to lead to differences in [identical] twins’ self-esteem.”

On the other hand, Marshall and her colleagues suggest that because fathers can sometimes have different primary interactions with their children—like relatively more play compared to caregiving—fathers’ affection can meaningfully impact their children’s attitudes about their self-worth.

Similarly, a 2011 study by Natasha Cabrera at the University of Maryland and her colleagues of over 500 children from ethnically diverse and low-income families across the United States suggests that early father-child relationships are important for children’s social and emotional well-being. Children who felt their fathers liked and understood them tended to have more positive friendships and fewer behavior problems than children who did not.

Play is important, too

Affection can come out in many ways, such as play. A 2020 research review by Annabel Amodia-Bidakowska at the University of Cambridge and her colleagues summarized the findings of nearly 80 studies (primarily from the United States, Europe, and Canada) about the impact of father’s play with their babies and toddlers.

They found that fathers spend a good deal of their time in physical play with their children, involving touch and movement like tickling, chasing, and “rough and tumble” activities like playful wrestling while smiling and laughing. They also found that children who experienced greater father-child physical play, toy play, and active play (like outside activities and games with balls) tended to have better self-regulation and social and emotional well-being.

There’s a caveat from these studies: Children whose fathers were more intrusive during play—overinvolved or controlling—tended to have poorer self-regulation. This suggests that play that is child-led, warm, and lighthearted can have a positive impact on children’s development.

Other research by Charissa Cheah at the University of Maryland and her colleagues shows that there are differences in the ways parents express love across cultures.

Thus, a father’s love can take many forms, depending on culture and circumstances. The important thing is to find pathways to affection, like playfully wrestling, serving a hearty lunch, or covering your child with a warm blanket. As these studies suggest, those are the moments that children will remember for the rest of their lives—and which can help them to flourish in adulthood.