By now we’re familiar with tales of professional burnout and boredom, of drops in the American happiness quotient despite increases in wealth. But rather than tracing this problem to the culture of the workplace, noted education author Nel Noddings finds its roots much earlier: in the classroom.

In her latest book, Happiness and Education, Noddings, now a professor of education at Columbia University after spending two decades at Stanford, argues that American schools shouldn’t serve merely as factories for the mass production of an able labor force. This practice, she contends, has reached new heights with the growing emphasis on standards and testing. Noddings agrees that schools can and should prepare students for work. But she says that in addition to professional success—perhaps even as a prerequisite for it—schools must equip students with the tools they need to flourish as well-rounded human beings. 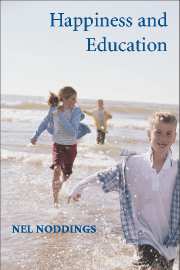 Is it outrageous to suggest that the purpose of education is to teach children how to be happy? Not by Noddings’ logic. She doesn’t want schools to pamper children with less rigorous curricula; far from it. Instead she advocates challenging children to think creatively about topics not found on standardized tests. One outcome of this, she argues, would be to nurture children’s individual interests rather than dulling these interests with routine work. But she says it would also prepare them to be active members of their community and vocal citizens in a democracy. She stresses the importance of skills not often touted by educational policy-makers today: tolerance, empathy, violence prevention, and perhaps most importantly, critical thinking. “To be happy,” she writes, “we need to understand ourselves and the groups to which we belong.”

Happiness and Education is ultimately a critique of American culture, not just its educational system. But Noddings shows how the narrow curriculum found in most classrooms helps shape a culture with some misguided priorities. Perhaps today’s educational leaders would benefit from reading her book and exercising some critical thinking of their own.