A recent Macy’s home sale supplement entices buyers with a simple statement: “It’s all about the pursuit of happiness.” Their ad agency must not have read new books by Richard Layard and Daniel Nettle, who refute traditional economic views that equate personal happiness with material gain.

Since 1950, postwar capitalism has led to an unprecedented standard of living in the West. Yet it has not translated into an equal upsurge in human happiness. Statistics indicate that while higher income does boost levels of happiness among people at or below the poverty line, this doesn’t hold true for the rest of the population. 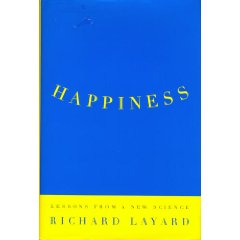 Layard and Nettle seek out the reasons behind these trends. Their books are part of the growing interdisciplinary field of hedonics (the study of happiness), which draws on neuroscience, applied economics, philosophy, sociology, anthropology, and psychology. The authors reflect this diversity: Layard founded Europe’s leading economics research center, at the London School of Economics; served as an economic adviser to the British government; and also became a member of the House of Lords. Nettle is a lecturer in psychology at the University of Newcastle. Their books also reflect a shift in research. For most of its history as a social science, psychology ignored the concept of happiness and focused instead on pathology. But more and more, psychologists are interested in exploring what happiness is, what conditions generate it, why it seems not to last, and what we can do to cultivate and sustain it.

According to Layard and Nettle, at least two forces prevent us from attaining happiness through material goods. First, we become habituated to what we get and then crave more, or something else. Secondly, we compare what we have with others. We’re happy with our paycheck until we find out our brother-in-law’s paycheck is bigger. We’re content with our house until we see our neighbor has more rooms. Nettle calls this a product of our evolution. The brain systems that control pleasure (satisfaction) are not identical to those that control desire (aspiration). So even when one part of our brain is feeling satisfaction, another part is urging us to want even more. The paradox is that we are conditioned neither for happiness nor unhappiness, but for pushing ourselves to tackle new challenges that enhance our fitness for survival. Happiness is merely an imaginary goal that gives us direction and purpose. Without recognizing this tendency in ourselves, he argues, we are prone to letting it trick us into making choices that don’t maximize happiness. Buying yet another pair of shoes, no matter how chic, won’t bring the fulfillment we may long for.

Layard points a finger at predictable culprits: Changes in gender roles and divorce rates, television, geographical mobility, debased moral values, and the rise of individualism all undermine happiness, according to his book. Layard’s arguments won’t seem new to people who already prefer going for a hike with friends or sharing dinner with family to watching TV. His message is akin to what so many spiritual leaders and philosophers have said for millennia: Enjoy things as they are, without comparing yourself to others, and discover what truly makes you happy. He encourages us to tame our rat-race instinct and train ourselves—using, for example, cognitive therapy, education, and Buddhist meditation techniques—to live in a more balanced way, not simply driven by competition for status. He also calls for enacting public policies to help create a different kind of society. He suggests, for instance, spending more money on mental health so that we reduce unhappiness, instead of simply focusing on getting happier.

The two authors cover similar terrain, but use different tones and approaches. Layard’s book is more of an exhortation for enlightened policymaking, and it can feel a bit preachy. Nettle’s book provides a clearer understanding of the pursuit of happiness, offers more interesting research findings, and questions whether we can actually change people’s happiness through public action. However, both authors write in an accessible style for the lay reader and reach parallel conclusions: Happiness comes from within, and expecting large gains in happiness is unrealistic. But if we broaden our pursuits beyond the acquisition of wealth and status, happiness may arrive on its own.