There’s hope for those who see the glass half empty. While several studies have shown that optimists enjoy better health, a recent study suggests that a change in perspective, from negative to one more positive, can directly boost the immune system.

In the study, by University of Kentucky psychologist Suzanne Segerstrom, 124 first-year law students took a questionnaire at five different points in the academic year, gauging their psychological outlook, including levels of optimism. They also took a special physiological test that measures their immune systems ability to fight viral infections and some bacterial infections. 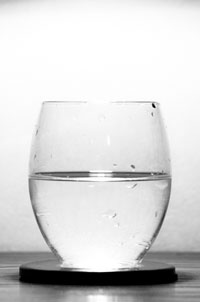 The results, published in Psychological Science, found that when the students didn’t have any information about their academic performance, like in the beginning of the semester, they had levels of optimism about their academic prospects that were in line with their overall disposition. However, once class ranks were released, their optimism correlated with their actual performance. For some, this meant their level of optimism stayed the same; for others, this caused major changes in optimism.

These results are important because they suggest that the link between optimism and health isn’t just determined by our basic, perhaps innate disposition: Psychological interventions to decrease pessimism and increase optimism could be used to better health.

The authors do note a difference between “little” optimism, which is based on situational expectancies like (in this study) grades, and “big” optimism, which is based on one’s overall temperament.  While little optimism does have positive effects on health and immunity, “big” optimism has bigger effects, as shown in previous studies. So changing one’s overall views of life to be more optimistic could bring with them even greater benefits to health and immunity, like resistance to viral disease and cancer.