Years ago, when I had my first media interview about my research on humility, the interviewer was curious whether studying humility actually made me any humbler. She asked me to poll my wife, to see how humble she perceived me to be. When I solicited my ranking from one to 10, my wife gave me a four. 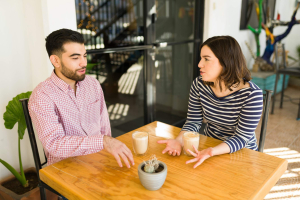 My embarrassment gave way to defensiveness. I was genuinely perplexed—why wasn’t I humble? I tried, counterproductively, to make a case for my humility by listing my humble attributes and actions (the irony is thick), but that initial defensiveness temporarily kept me from being able to use this feedback as a way to grow. I couldn’t see my own lack of humility.

Even an expert in humility needs to work hard to open his mind and reduce defensiveness. But why bother?

Humility is an underrated but highly important human virtue. People prefer a partner or friend who is humble, partly because it signals trust and dependability. To make progress intellectually as a society or as individuals, we have to admit what we know—and, more importantly, what we don’t know—and be curious, open to new ideas, and willing to listen. Likewise, acknowledging that our own cultural worldview is but one of many ways to engage with the world, and meeting other perspectives with a desire to learn and an appreciation for diversity, helps us navigate an increasingly global and interconnected world.

When we learn to tame our defensive instincts, we open ourselves up to all the benefits that humility can offer.

Why are we so defensive?

A harsh truth about being human is that we’re naturally defensive—and our defensiveness comes out in a few ways.

First, we have a desire to be right. We want our views about the world to be validated by other people. Usually, this means that we become friends with people who share our beliefs, and we tend not to surround ourselves with people who hold different opinions than we do. When we’re wrong, we seek ways to prove that we’re right, even at a cost to our relationships. And we twist evidence to confirm that we’re indeed correct. Our drive to be right makes it hard to receive feedback.

We also desire certainty. We don’t like “not knowing,” and our culture treats any lack of knowledge as inherently bad. At the same time, we’re forced to confront a high degree of uncertainty because of the nature of existence. The world is unpredictable, and because humans are intelligent and have the capacity for self-awareness, we’re able to mentally “project” ourselves into the future—that is, we’re able to envision different possible futures. We can imagine ourselves in different places, enjoying myriad experiences, with various people, in a host of different contexts. But we’re also aware that life does not always go as we imagine: We know that we could be struck down with a terminal illness, run over by a bus, attacked by a stranger, caught in a natural disaster, abandoned by our partner, or fired from our job.

Psychotherapists suggest that our lack of control in the world—and the human burden to have to make decisions despite the absence of any one clear best choice—is a primary source of anxiety and other mental illness. We desire certainty in an uncertain world. So, we cling to certainty when we can and avoid uncertainty whenever possible.

Finally, we act defensively because we interpret the world in ways that are consistent with our own schema—we see the world precisely as we want to. We’re so adept at ignoring inconsistencies with our beliefs and at seeking—and paying attention to—only the information that affirms our preexisting beliefs, that we often don’t realize when we’re acting defensively. It’s hard for us to see how truly closed-minded we are.

How to cultivate humility

These truths about ourselves are hard to swallow. Some of us acknowledge that we may have defensive tendencies, but then (like me) we quickly begin assembling evidence for the ways that we’re not that bad or that other people are worse, which is just a different version of the same defensiveness.

This tendency runs deep, but it can be overcome. Here are four ways to help cultivate humility by reducing defensiveness. 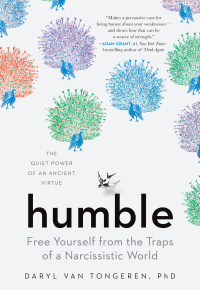 This essay is adapted from Humble: Free Yourself from the Traps of a Narcissistic World (The Experiment, 2022, 304 pages).

Affirm areas of meaning. When our worldview is threatened—like when someone challenges our political ideology or suggests our religious beliefs are wrong—we’re quick to shift to defending our sense of meaning in other areas of life. This compensatory response offers an important clue to how we can start to become less defensive and more open-minded: by building meaning. We’re natural meaning-makers who flourish best when things make sense (and when we feel like we matter and have a purpose).

Working to affirm areas of meaning can help us feel more secure and be less likely to respond out of self-protection. Research suggests that the ways we find meaning (such as relationships, self-esteem, certainty, and values) are somewhat interchangeable. When a failure at work leaves your self-esteem feeling humbled, for example, you can shore up the sense of meaning you get elsewhere.

This kind of affirmation can take several forms, such as reflecting and journaling about your core values or a meaningful relationship. This can enhance your feeling of authenticity and integrity, taking the edge off future threats.

So, the next time you feel like you want to respond defensively by arguing, putting other people down, discounting the views of others, or doubling down on your way of seeing the world, take a moment and remind yourself of what you find meaningful in life.

Acknowledge your own limitations. Humility involves an accurate perception of both strengths and weaknesses. Admitting that you have some flaws will help reshape your ideas and self-perception, which will make seemingly challenging information—like negative feedback or constructive criticism—less threatening. After all, if you know that you have limitations and can own them, when you receive feedback that contradicts the way you see the world, you can fit it more neatly into how you make sense of things. Admitting that you are often wrong makes it easier to be wrong, because it’s less unexpected to be wrong.

In the 21st century, most people’s lives are made possible by interdependence. We need each other. I couldn’t be writing this article if not for the thousands of people who made it possible for me to find a job I did not create, write on a laptop I did not design, live in a home that I did not build, eat food that I did not grow, drive in a car I did not manufacture, and wear clothes I did not sew. From an evolutionary perspective, humans have helped solve collective problems and made it easier for us all to survive collectively through the division of labor. And as we’ve become more specialized, we realized that we’re not able to do it all; there are things we’re good at and areas where we’re lacking. Similarly, we can turn the acknowledgement of our own limitations into a grateful realization that we’re all in this together.

Diversify your social investments. Because our defenses are often sharpened by people who share our beliefs, you need a network of friends, family, and colleagues who hold different ideas from yours. By weaving together a rich tapestry of voices in your life, you will engage with divergent viewpoints, which should reduce your defensive responses by familiarizing you to different ways of seeing the world that are held by people you like.

In each college course that I teach, I implore my students to find people who are different from them, get to know them, and become friends. They should seek out friends of different ethnicities, religions, cultures, economic classes, political parties, or in different stages of life; these could be people who like different music or TV shows, have different hobbies or interests, or come from a vastly different background. In one class, I assign my students to attend at least one service from a faith tradition different from their own (and for some, this is any place of worship).

Acknowledging that other people hold different perspectives and appreciating your shared humanity with them make you less likely to respond negatively to future perspectives that run counter to your own.

Consider one of your deepest-held beliefs—perhaps your religious beliefs, political opinions, view of climate change or immigration policy, interpretation of the Second Amendment, or stance on the free market. Begin by arguing against yourself. What weak spots might you have in your argument? Where have you not yet searched for facts or evidence regarding this topic? What evidence is there that you might be incorrect? Who are knowledgeable people about this issue whom you’ve previously disregarded—and what do they have to say about the topic? What are some counterpoints to your arguments? What might motivate you to have this belief, and in what areas might you have blind spots?

The goal of this exercise is not for you to change your cherished beliefs and switch political parties or religions. Rather, the point is to realize that other smart, decent people believe differently than you do, so it’s possible—even likely—that you’re wrong about a few things.

Learning to argue against yourself and seeking opposing views are tools to avoid falling into the trap of closed-minded defensiveness and are markers of wise decision-making.

These efforts are hard but worthwhile. And even the best intentions may come up short. But as for me, I’m committed to it. Each day, I try to be a bit less defensive and bit more open. Slowly, I’m hoping it will open me up to greater humility. After all, it beats the alternative.