Why do we humans engage in altruistic behavior, from helping neighbors to donating money to people across the globe? 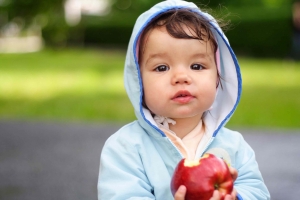 This is a question that has confounded many scientists. It seems that, if our goal in life is self-preservation and passing on our genes to our children—as evolutionary biologists will tell you—then we should always make selfish choices to help ourselves first, rather than sacrificing for the benefit of others.

In response, some argue that helping others in need is only a way of feeling good ourselves. After all, we can get a quick hit of the “helper’s high”—a warm feeling activated by giving—and enjoy the gratitude of others, as well as their admiration. This view makes altruism seem, well, not so altruistic.

But a new study suggests that altruism may run deeper than that. Children as young as 19 months old gave to others, even when it cost them and they received no thanks or reward.

In this study, 96 infants around 19 months old experienced one of two scenarios. In one scenario, babies watched as a researcher accidentally dropped a piece of fruit onto a tray (that only the baby could reach) and then held out his arm as if begging for the fruit. In the other scenario, the experimenter also dropped the fruit on the tray, but showed no signs of needing it, though he did hold out his hand.

Then, the experimenters watched to see if the baby would try to give the fruit to the researcher or keep it for themselves, running different tests with bananas, blueberries, grapes, and strawberries. The babies gave the fruits to the begging researcher 58 percent of the time and only 4 percent when he didn’t beg.

The second time around, there was a catch: The researchers made sure that the babies were at the end of a feeding cycle and hungry themselves, which meant they would covet the fruits even more. But even when hungry, 37.5 percent of the babies gave the fruit to the begging researcher, while none of them gave it away when he didn’t beg. This suggests that babies want to help out, even when it costs them.

“The infants were perfectly capable of giving away something that was of very personal value to them,” says lead researcher Rodolfo Cortes Barragan of the University of Washington. “This action—of actively giving away highly desirable food to a stranger, even when one is hungry—is not something we see in any other species.”

It also suggests that babies may develop some aspects of empathy at pretty young ages.

“They certainly are able to understand what other people’s needs are,” says Cortes Barragan. He suggests that babies may learn this through modeling—by seeing their own mothers reading their emotional cues and helping them out.

Interestingly, this behavior wasn’t due to the babies being trained during the experiment—they tended to give away the fruit the first time they were tested. And, since the experimenters did not show any emotion or thank the babies when they received the fruit, there was no social reward or emotional cue for the babies that might have encouraged them to keep giving.

Socialization may still play a role in altruism, though, says Cortes Barragan. In fact, he and his team found that babies with siblings gave more often, “perhaps because they had more experience reading another person’s gestures and understanding that indicated a need,” he says.

“People don’t usually look for cultural differences in children that young, but by 19 months of age, children have learned a wealth of information, and that includes cultural manners,” says Cortes Barragan.

Overall, Cortes Barragan’s experiment suggests that altruism is both hardwired and socially reinforced—likely through cultural and familial role modeling. One of his promising lines of research found that when parents engage their children in play that is mutually engaging and involves reciprocity, they tend to be more responsive and altruistic toward others. He is hopeful that science will eventually uncover what’s needed to nudge children toward developing altruism over time, which, in turn, might contribute to a more cohesive, compassionate society.

“What are the social ingredients that go into it? Once we know that, it can inform us about how children might be learning these social skills and social behaviors in everyday life,” he says.