Altruistic people tend to score higher on many measures of life satisfaction. Yes, that seems counterintuitive, and such measures can admittedly be subjective. So a research team decided to explore the relationship between selflessness and two outcomes we are evolutionarily programmed to desire: wealth and procreation.

It reports generous people have more children than selfish ones. What’s more, as a rule, they also earn more money. 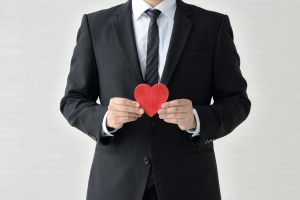 In the Journal of Personality and Social Psychology, the researchers describe five studies that explore this connection. They analyzed four large-scale data sets, including two that tracked individuals and families over a period of years.

One was the U.K. Household Longitudinal Study, a representative sample of British households. The researchers compared the responses people gave regarding altruistic behavior in 2010 with their income and number of children in 2016. Altruism was measured by the amount they gave to charity, and the time they spent volunteering.

A similarly structured American study, featuring data from the Panel Study of Income Dynamics, found the same pattern. Over a 14-year period, those in the top bracket of altruism—which, like the British study, amounted to one-quarter of the sample—“had both the most children, and the highest income, of all respondents.”

In the two other studies—one in the United States and one in Europe—“the largest incomes tended to be found among moderately prosocial people,” the researchers write. They speculate extreme altruists may find satisfaction in relatively low-paying jobs in which they can help others.

How to explain the link with fertility? The researchers point to two possibilities. Selfish people tend to have “lower-quality relationships,” which means they “have fewer opportunities to have children,” they note. In addition, such people “may simply be less interested in having children, given the time, money, and other forms of self-sacrifice that having and raising children typically entails.”

So are we evolving into less-selfish people? Unlikely, the researchers report. While genes promoting selfishness may be getting less common, they write, “the total level of selfish behavior in society is likely to be more strongly determined by norms, institutions, and other psychological factors.”

If a nation’s leader sets societal norms, we are certainly not prioritizing altruistic behavior at the moment. But that could change if word gets out that generous people make the most money—as well as enjoy better sex lives. Perhaps it’s time for a more accurate reality television show: Lifestyles of the Helpful and Happy.