By definition, empathy is a social practice—it’s an arm around the shoulder and a few reassuring words, an “I hear you.”

But two new studies suggest that empathic people aren’t just skilled at navigating other people’s emotions. They’re in touch with their own feelings, too—which means that self-awareness may be one of the foundations of empathy. 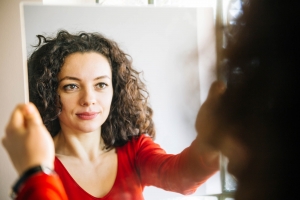 The results for both groups were the same: The more self-awareness students demonstrated, the greater their cognitive empathy.

To get an even more accurate picture of empathy, researchers in the Emotion study gave participants a test. They watched videos of other students in a stressful situation—preparing and then delivering a five-minute speech on why they should be hired for their dream job—and tried to discern what the students in the videos were feeling before and after the speech. (The speech-giving students had also rated their feelings, so researchers could compare the ratings to measure empathy.)

Again, the more self-aware participants excelled at this cognitive empathy test. Compared to their less self-aware peers, they could better detect negative emotions in the students who had just given a speech.

In both studies, however, the self-aware students didn’t have higher affective empathy. It seems that the ability to label, describe, and process your own feelings is related to understanding what others may be feeling, but not necessarily feeling those feelings yourself.

For those who struggle with self-awareness, it can seem like a daunting skill to cultivate—but the study published in Mindfulness provides some guidance. The students also answered questionnaires about their mindfulness, and the more self-aware students tended to be more mindful: more attentive to and aware of the present moment without judgment. Indeed, other research suggests that one way to get in touch with your thoughts and feelings is by practicing mindfulness.

“We get lots of messages that emotions are not important, so many people learn to respond to them by ignoring them or wishing they would go away,” says Eckland. “Valuing and paying attention to [emotional] signals may help improve your knowledge about what they are trying to say.”

Helen MacDonald, an assistant professor of psychology at Emmanuel College and lead author of the Mindfulness paper, also suggests psychotherapy as one of the best pathways to self-awareness.

The participants in these studies were mostly young, white women, and future research may explore whether this pattern holds among people of other ages and cultures. In the meantime, they represent a provocative, new way of thinking about empathy and emotional awareness. Reflecting on our innermost pain and yearnings can feel selfish or self-indulgent, but the things it teaches us about emotions apply to the entire human race.

“The idea that empathy may begin with self-awareness is compelling to me,” says MacDonald.

So, before you put yourself in someone else’s shoes, you might first take a good look at your own footwear!