Among the first visual symbols of the COVID-19 pandemic were grocery store shelves picked clean by shoppers hoarding pasta and toilet paper. The bare shelves revealed a deeply ingrained human tendency—to grasp for all that’s left when supplies run low. 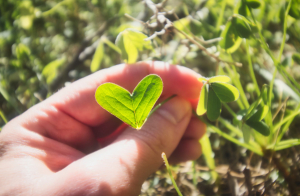 As climate change puts a strain on crop yields and drinking water stores, these kinds of feeding frenzies could become the new normal. But they’re not inevitable: New research from Northeastern University suggests that when people feel grateful for what they have, they’re less likely to overdraw from a shrinking pool of resources. The study “provides initial evidence that gratitude is useful in nudging sustainable behavior,” says graduate student Shanyu Kates, the paper’s first author.

Kates’s findings suggest that practicing gratitude could curb our collective tendency to take more than our share, says psychologist Scott Allison of the University of Richmond.

“Gratitude led to less greedy and more generous choices,” says Allison, who was not involved in the research. “What’s really impressive is how the investigators were able to demonstrate that it was gratitude itself, not the happiness that results from gratitude, which produces more prosocial [kind and helpful] behavior.”

Sustainable-living promoters tend to run up against what ecologist Garrett Hardin called the “tragedy of the commons”: People hoard resources to ensure they can meet their own needs, but the resulting scarcity takes a toll on everyone’s well-being.

Kates and her advisor, Northeastern social psychologist David DeSteno, wanted to explore possible ways to forestall this kind of tragedy. In one study, they recruited 155 undergraduate students and induced gratitude in one group by having them write about a time when they felt grateful. The remaining control-group students wrote about events from a typical day.

After this writing exercise, all the participants took part in a game where they decided how many resource points to extract from a collective bank. The game started with a common pool of 200 points. “For each round of the game, we tell them, ‘You can take out a certain amount of points—between zero and 10—and whatever is taken out goes to you,’” Kates says.

To make sure people valued the points, experimenters told the students that the more points they extracted, the more likely they were to win a $200 cash prize. Throughout the game, participants could see how many points other players had taken and how many points were left. After each round was played, the researchers boosted the point bank by 10% to mimic the regeneration of real-life resources.

When Kates and DeSteno tallied the results, a significant difference emerged between the gratitude group and the control group. Control participants took significantly more points from the pool when they saw it draining rapidly. Grateful participants, however, took about the same number of points no matter how quickly the pool was shrinking.

In a second, related study, Kates and DeSteno divided 224 participants into three groups. One wrote about gratitude and another about a happy time in their lives. The control group wrote about their daily routine.

Just as in the first study, the gratitude group refrained from overdrawing resources in the game even when they were draining quickly. Feeling happy, however, didn’t inspire people to show the same kind of restraint.

“If you’re in a neutral or a happy state, you increase your point taking when the pool is depleting,” Kates says. “But for gratitude, this effect becomes erased. It doesn’t matter if others around you are over-taking and the pool is depleting—you won’t over-take [from the pool] yourself.”

The sustaining power of gratitude

Kates and DeSteno’s study didn’t specifically address why grateful people may be more apt to behave sustainably than those who simply feel good. But past research, Kates points out, suggests that happiness sometimes drives us to become more self-centered as we seek out situations that promise even more happiness.

“When you’re feeling happy, you might not want to sacrifice by taking less and conserving for the group,” Kates says. Picture a rat at a sugar-water dispenser—once it’s had a taste of uncomplicated sweetness, it returns to that same dispenser over and over.

Gratitude, on the other hand, has promoted both well-being and social awareness in multiple experiments. In a University of California–Riverside study where high school students spent 10 minutes a week writing letters of gratitude to friends, coaches, and other influential people, they reported feeling more satisfied with their lives and more connected to others around them than members of a control group.

That sense of connectedness could help inspire generous or sustainable action. In a meta-analysis reviewing 91 studies, researchers at the U.K.’s University of Nottingham found a strong relationship between gratitude and prosocial behavior of different kinds.

“Sustainability really requires action for future benefit as well as collective benefit,” Kates says. “Gratitude promotes these dimensions—it makes us behave more prosocially, and it makes us more cooperative with others.”

Something akin to the reciprocity principle may also be at work: When someone gives something to you, you naturally feel compelled to give something back. In the same way, when people feel grateful for good fortune or for contributions others have made to their lives, they may be more likely to take a “pay it forward” approach and look for ways to contribute to the common good.

The observed connection between gratitude and sustainable behavior means that gratitude exercises could potentially help keep the planet livable over the long term. “If we are fortunate enough to live in a part of the world that offers us clean, drinkable water, let’s be grateful each time we use it,” Allison says. “With the desertification of the western U.S., this simple practice of gratitude on a mass level may forestall disaster.”

However, Kates says, more research needs to be done to clarify which aspects of gratitude might promote sustainable behavior and why. She is planning a new study that examines how individual players’ behavior during the resource game affects the behavior of others around them. “Does a group of grateful people fare better in the game than those where none of them are grateful? And what happens if only one person in the group is feeling grateful? Is that enough to shift others’ behaviors?”

If grateful people turn out to set a behavioral lead for others to follow, a group might ultimately reach a sustainable “immunity threshold,” so to speak: a new social norm that encourages judicious resource use even in members who aren’t naturally inclined to care about such things.

“It’s promising to think about and measure how cultivating long-term gratitude through daily practice may be useful in this battle against climate change,” Kates says, “and be able to be the tipping point for large-scale behavioral changes.”