Participating in complex and diverse social networks is part of what makes us human. Unlike other primates, you may be a child, a parent, a sibling, a spouse, an employee, a volunteer, a coach, a student, a member of a choir, and a friend. That’s a lot of hats to wear, which can be stressful. But are there benefits as well? 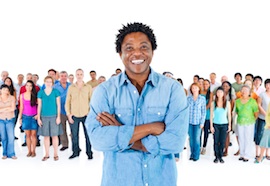 A recent study in the journal Psychological Science suggests that people who play more diverse social roles may be better able to perceive and decode nonverbal cues in a variety of social settings.

George Mason University researchers Sarah Dziura and James Thompson asked 26 participants to fill out surveys about the size and diversity of their social networks, as well as how involved were they in each social role (a factor they called “embeddedness”). The participants underwent a 2.5-hour functional magnetic resonance imaging (fMRI) experiment, where they watched a series of two-second videos. Half the videos showed dots moving in a “coherent biological motion” (the dots originated from movies of actors who had reflective markers attached to various parts of their bodies) while the other half showed scrambled versions of these movies, to serve as a control condition. To ensure that the participants were paying attention, they were asked to press a button if they saw the same video repeated twice in a row.

Next, Dziura and Thompson compared the activity in two brain regions known to be involved in perceiving and interpreting nonverbal social cues—the right posterior superior temporal sulcus (pSTS) and right amygdala—when the participants were watching videos showing the biological motions versus the scrambled motions. They then looked at the relationship between the magnitude of this difference and the size and complexity of the participants’ social networks.

The researchers found more activation in the pSTS in people who had richer and more diverse social networks. This finding did not depend on the size of the social networks or how embedded participants were in the roles. While Dziura and Thompson also found a positive correlation between activation in the right amygdala and social network diversity and embeddedness, this result disappeared when they took the age of the participants into consideration. They suggest that future studies could look at possible relationships between people’s social networks and their ability to perceive facial expressions and gestures—the idea is that more emotionally charged stimuli may evoke stronger responses from the amygdala.

We rarely think about the work that our brains do to interpret the countless verbal and nonverbal social cues produced by the other people in our lives. But we depend on our ability to correctly decode these signals in order to have successful relationships. According to the authors, the takeaway from this study is “that with greater complexity of social behavior comes an increase in the functioning of neural systems to decode these increasingly complex communicatory signals.”

While this study alone does not tell us that having a diverse social network necessarily increases our ability to perceive nonverbal cues (or vice versa), it does present an interesting possibility, that working to diversify your social networks may help you better understand the people in your existing relationships. Maybe it’s time to volunteer or join a new club?